‘Donald Trump has compared a London hospital to a “war zone” because of knife crime, as he defended the use of guns in America.

Speaking at the National Rifle Convention (NRA) in Dallas, the US president claimed there was blood all over a unnamed hospital’s floors while he referenced the knife murders in the capital this year.

“I recently read a story that in London, which has unbelievably tough gun laws, a once very prestigious hospital right in the middle is like a war zone for horrible stabbing wounds,” he said.

“Yes, that’s right they don’t have guns, they have knives – and instead is blood all over the floors of this hospital.

“They say it’s as bad as a military war zone hospital. Knives, knives, knives. London hasn’t been used to that, they’re getting used to it, it’s pretty tough.”

The President then mimed a stabbing motion.

At least 38 people in London have lost their lives to knife crime so far this year, according to the Met Police.

The President then turned his attention to the Paris terror attacks.

Making a gun gesture with his fingers and shouting “boom”, he told the audience that “if one employee or just one patron had a gun… or if one person in this room had been there with a gun” the attackers would have been stopped in their tracks.’ 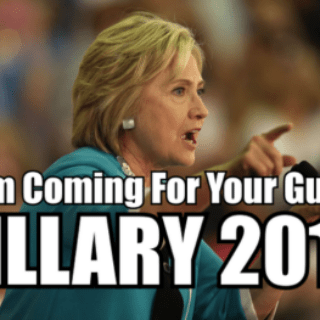