Boris Johnson lied about Skripal on VIDEO, putting his position as UK Foreign Secretary under threat

Get short URL
© Anton Vaganov / Reuters
Boris Johnson put his post in jeopardy after apparently lying about Russia being proven as the source of a nerve agent used in the Skripals’ poisoning. On Tuesday, the Porton Down lab said that they hadn’t identified the source.

The Foreign Secretary’s statement, which is being widely shared on social media, features him telling Germany’s state broadcaster that scientists from the Porton Down laboratory were“categorical” about the Russian origin of the substance used in the alleged nerve attack. 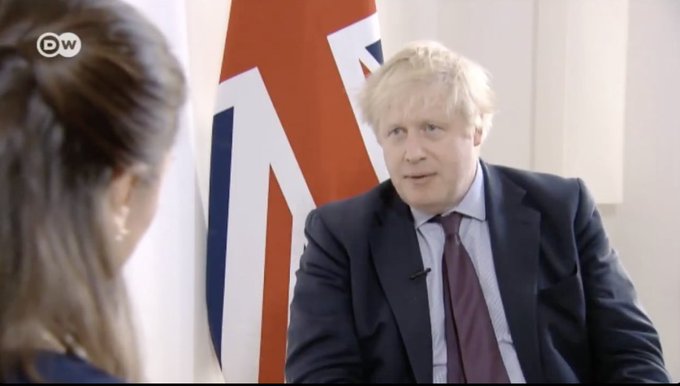 For the avoidance of doubt – here is Boris Johnson clearly claiming that Porton Down had confirmed to him the source of the Salisbury nerve agent. Words matter. He lied.

Midway through the interview, conducted a fortnight ago, the German TV interviewer asks Johnson: “you argue that the source of this nerve agent, Novichok, is Russia. How did you manage to find it out so quickly? Does Britain possess samples of it?

Porton Down revelations: How they affect Skripal case, Russia and Theresa May’s govt

“Let me be clear with you … When I look at the evidence, I mean the people from Porton Down, the laboratory,” he replies, before the presenter interjects “So they have the samples?”

“They do. And they were absolutely categorical and I asked the guy myself, I said, “Are you sure?” And he said there’s no doubt,”Johnson replies.

READ MORE: ‘London will have to apologize yet’ – Putin spokesman on UK lab’s revelation in Skripal case

On Tuesday, the chief executive of Porton Down told Sky News how his scientists were unable to link samples of the substance, allegedly used to attack Sergei and Yulia Skripal, to Russia. Gary Aitkenhead insisted that, while the experts had identified the agent as A-234 or “Novichok” they had “not identified the precise source.”

Amid online fury over Johnson’s deception, some prominent figures have sought his head. They include Guardian contributor, Hicham Yezza, who tweeted: “In a Deutsche Welle interview two weeks ago, Boris Johnson said Porton Down experts were ‘categorical’ Russia was the source of the Skripal Novichok. Today, Porton Down’s CEO has confirmed this was not true. If confirmed, Boris Johnson must resign.”

In a @DeutscheWelle interview two weeks ago, Boris Johnson said Porton Down experts were ‘categorical’ Russia was the source of the Skripal Novichok.

Today, Porton Down’s CEO has confirmed this was not true.

If confirmed, Boris Johnson must resign.

Chris Furlong, a Labour councillor, joined the chorus, throwing down a gauntlet to the Prime Minister: “Foreign Secretary Boris Johnson here lying about being told by Porton Down that the source of nerve agent was from Russia. Today they have confirmed they cannot identify its source. It’s a blatant and dangerous lie. When will you sack him Theresa May?” At the same time, Jeremy Corbyn’s biographer Alex Nunns said “Surely this is a resignation issue for Johnson, as the UK’s chief diplomat, on a matter so serious.”

Boris Johnson said that Porton Down “categorically” knew the source of the nerve agent was Russia—”no doubt”.
Porton Down now says it cannot know if the source was Russia.
Surely this is a resignation issue for Johnson, as the UK’s chief diplomat, on a matter so serious.

Meanwhile, Mark Urban, the diplomatic editor of Newsnight, a long-running show on BBC, pointed out how “even though much of HMG [Her Majesty’s Government] maintained the ‘highly likely’ line and did not suggest that origin of Salisbury Novichok had been traced to Russia, some overstated their case so there could now be a political price to pay.”

The Skripals, ex-double agent Sergei and his daughter, were found slumped on a park bench in Salisbury on March 4 and both the EU and US leaders have been blaming Russia for the poisoning ever since – without letting Russia see any proof behind the accusations.