NATO’s War on Libya and Africa

SLOUCHING TOWARDS SIRTE
NATO’S WAR ON LIBYA AND AFRICA 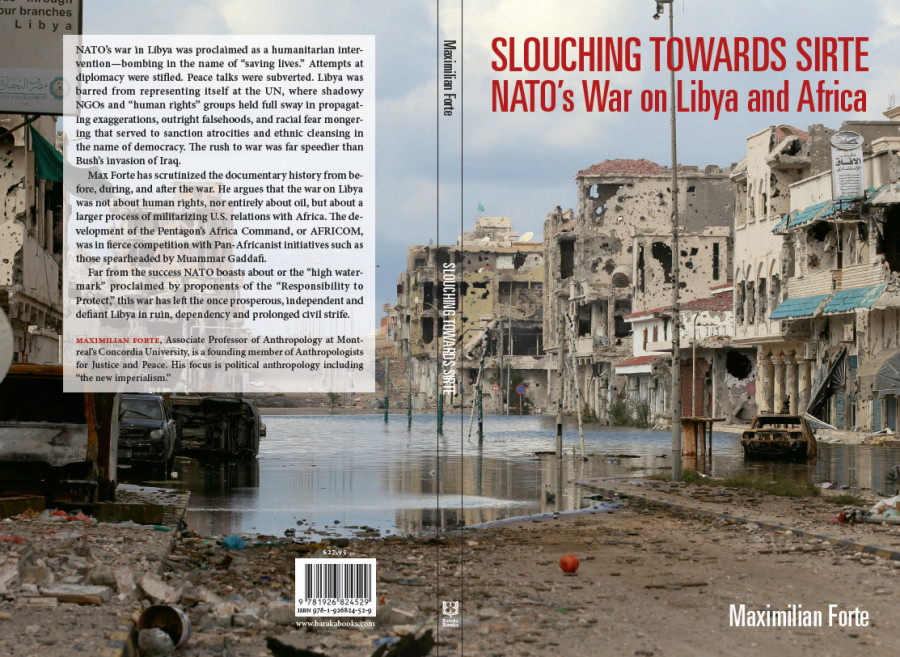 NATO’s war in Libya was proclaimed as a humanitarian intervention—bombing in the name of “saving lives.” Attempts at diplomacy were stifled. Peace talks were subverted. Libya was barred from representing itself at the UN, where shadowy NGOs and “human rights” groups held full sway in propagating exaggerations, outright falsehoods, and racial fear mongering that served to sanction atrocities and ethnic cleansing in the name of democracy. The rush to war was far speedier than Bush’s invasion of Iraq.

Max Forte has scrutinized the documentary history from before, during, and after the war. He argues that the war on Libya was not about human rights, nor entirely about oil, but about a larger process of militarizing U.S. relations with Africa. The development of the Pentagon’s Africa Command, or AFRICOM, was in fierce competition with Pan-Africanist initiatives such as those spearheaded by Muammar Gaddafi.

Far from the success NATO boasts about or the “high watermark” proclaimed by proponents of the “Responsibility to Protect,” this war has left the once prosperous, independent and defiant Libya in ruin, dependency and prolonged civil strife. 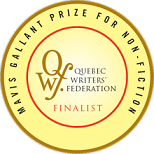 “This solidly-documented book is Maximilian Forte’s courageous initiative to unveil the real reasons behind NATO’s intervention in Libya …. The author analyses how well-meaning civil rights NGO’s were manipulated into supporting U.S. military policies and commercial interests under the guise of protecting civil rights. The author develops his postulates through an in-depth analysis of documents from before, during and after the war.” ~ Declaration by the jury, Mavis Gallant Prize, Quebec Writers’ Federation

Stephen Gowans speaking about Slouching Towards Sirte, on the Taylor Report:

“Slouching Towards Sirte is a penetrating critique, not only of the NATO intervention in Libya, but of the concept of humanitarian intervention and imperialism in our time. It is the definitive treatment of NATO’s war on Libya. It is difficult to imagine it will be surpassed.” ~ Stephen Gowans, What’s Left (HTML) (mirror) (PDF) (PDF)

“very powerful and heart-breaking. I think it will be the definitive work on the subject.” ~ Daniel M. Kovalik

“Maximilian Forte challenges many of the prevailing notions, both of the left and right, about Libya and the reasons behind the NATO intervention there which toppled the government of Muammar Gaddafi….in these times in which we live, it is critical to be wary of any claims by the Western powers, especially the U.S., that they are going to war to protect human rights, for it is almost invariably the case that the war ends up violating more human rights than it protects. Indeed, human rights have sadly become the Trojan Horse the U.S. and its allies NGOs use to justify violent intervention into foreign lands. So, while the Trojan Horse story led to the famous maxim, ‘Beware of Greeks bearing gifts,’ I would counsel the people of the poorer Global South, to ‘Beware of Westerners bearing human rights.’ Certainly, Forte shows why this advice should be heeded.” ~ Daniel M. Kovalik, CounterPunch (HTML) (HTML Español) (PDF)

“…bold and incendiary…Forte doesn’t skimp on documentary evidence to make his case….A complex depiction of collusion and willful ignorance among NATO nations—and most especially, the United States—emerges….Forte’s allegations that NATO’s war was manufactured by liberal interventionists and ‘iPad imperialists’ whose agenda to disrupt African independence and execute regime change under the ‘fig leaf’ of saving lives are chilling—and persuasive. So too is the timeline of events between the start of the protests and the propagandist hysteria promulgated online….In this provocative and unabashedly direct book, Forte speaks truth to power.” ~ Amy O’Loughlin, ForeWord Reviews (HTML) (PDF)

“Forte, a Montreal based activist and anthropologist, provides a compelling counter-narrative to mainstream media accounts of the war on Libya and the overthrow and assassination of Muammar Gaddafi. Slouching Towards Sirte has an excellent analysis of the contradictions and paradoxes of Gaddafi’s pan-Africanism and Libyan anti-Black racism while arguing persuasively that regime change in Libya is but a preview of US strategy in Africa through AFRICOM.” ~ 10 Books for 2012, The Public Archive

“an ethnography of U.S. culture and the way it enabled and contributed to the destruction of Libya. It is also a meticulously documented study in hypocrisy: that of the U.S. elite, of the Gulf ruling classes who have lately welded their agenda directly onto that of the United States, and of the liberal bombardiers who emerged in the crucible of the ‘humanitarian’ wars of the 1990s only to reemerge as cheerleaders for the destruction of another Arab country in 2011. Finally, it is a study of the breakdown of the anti-war principles of leftists in the United States and Europe, so many of whom, for so long, sustained an infatuation with confused rebels whose leadership early on had their hand out to the U.S. empire…” ~ Max Ajl, The Monthly Review (April 2013, pp. 55-59) [also available here]

“Thoroughly researched and impeccably referenced, it tells the story of the real aims and real consequences of the war on Libya in its historical perspective. Its author, Maximilian Forte, is well placed to do so. A professor of social anthropology in Montreal, much of his writing and research in recent years has been dedicated to the new imperialism, and especially its ‘humanitarian’ cover. He was amongst the first to really expose violent racism within the Libyan insurrection, and its role in facilitating NATO’s goals in Africa, and has provided consistently excellent analyses of the media coverage surrounding the conflict….Forte’s book is a must-read for anyone seriously interested in understanding the motives and consequences of the West’s onslaught against Libya and African development.” ~ Dan Glazebrook, Ceasefire Magazine

“The anti-imperialist movement of the 20th century had Frantz Fanon’s The Wretched of the Earth. Today, we have Maximilian Forte’s Slouching Towards Sirte: NATO’s War on Libya and Africa.” ~ Donnchadh Mac an Ghoill

“In Slouching Towards Sirte, Maximilian Forte focuses on the terrible consequences of the U.S.-NATO onslaught in the town of Sirte, a Qaddafi stronghold which was nearly completely destroyed. Forte documents the use of indiscriminate firepower by rebels, the targeting of civilians and civilian rescuers, and abuses committed at checkpoints designed to control population movement…” ~ Jeremy Kuzmarov is J.P. Walker assistant professor of history, University of Tulsa, Z Communications

“…excellent book….As Forte writes with bitter irony, the propaganda surrounding the Libyan war demands ‘vigilance and scepticism in the face of the heady claims of our own inherent goodness which can only find its highest expression in the form of aerial bombardment’. Alas, vigilance and scepticism are in short supply within the corporate media.” ~ David Edwards, Media Lens

“But the shine [of NATO’s intervention] was, from the start, an illusion, as Maximilian Forte proves in his important new book, Slouching Towards Sirte. Forte thoroughly chronicles NATO’s bombing of Libya and the crimes against humanity for which NATO is responsible….Self-described humanitarians would do well to consider how their advocacy of the Libyan campaign not only caused extensive death and human rights violations but may prove to have helped usher in decades of more war in this continent.” ~ Greg Shupak, Jacobin

“Slouching Towards Sirte is a scholarly and well-documented account that gives reader the impression that ‘humanitarian missions’ and the so-called ‘Responsibility to Protect’ are just an ideological facade and smokescreen used to mask the raw imposition of power and punishment on the nations whose leaders dare to oppose the “new world order” of liberal democracy…. Undoubtedly, the author…by publishing this book has laid the ground-work for critical anthropology. On the whole, the book is a powerful argument against the humanitarian mythpromoted by western powers to mask the imposition of their dominance on other societies. Unfortunately, this fact is ignored by many, who ostrich-like prefer to put their heads in sand.” ~ Damir Mirkovic, Professor Emeritus, Brandon University

“The key facts? There was no “mass rape” ordered by Gadhafi, a claim repeated many times by Hillary Clinton (and eventually refuted by Amnesty International, the UN and even the U.S. Army). There was no bombing of protesters (a fact admitted to by the CIA’s Robert Gates). There was no plan for a “massacre” in Benghazi. Gadhafi offered amnesty to any insurgents who laid down their arms — in contrast the “no mercy” theme played by the Western powers. All of these facts are to be found in Slouching Towards Sirte: NATO’s War on Libya and Africa by Maximilian Forte.” ~ Murray Dobbin

“Maximilian Forte’s book on the Libyan war, Slouching Towards Sirte, is another powerful (and hence marginalized) study of the imperial powers in violent action, and with painful results, but supported by the UN, media, NGOs and a significant body of liberals and leftists who had persuaded themselves that this was a humanitarian enterprise. Forte shows compellingly that it wasn’t the least little bit humanitarian, either in the intent of its principals (the United States, France, and Great Britain) or in its results. As in the earlier cases of ‘humanitarian intervention\ the Libyan program rested intellectually and ideologically on a set of supposedly justifying events and threats that were fabricated, selective, and/or otherwise misleading, but which were quickly institutionalized within the Western propaganda system.” ~ Edward S. Herman

For interviews about this book, see “About the Book” in the menu.

Maximilian C. Forte is a Professor in the Department of Sociology and Anthropology at Concordia University in Montréal, Québec. He teaches courses in the field of political anthropology dealing with “the new imperialism,” cultural imperialism, Indigenous resistance movements and philosophies, theories and histories of colonialism, and critiques of the mass media. He writes regularly for the Zero Anthropology Project, with additional articles appearing in Global Research, CounterPunch, MRzine, and was formerly a columnist for Al Jazeera Arabic.