Royal Parasites ARE the illuminati!

‘Sitting on her throne, a chopper out back and private security out front, dripping in more diamonds than P-Diddy, things are looking pretty rosy for the Queen right now. It turns out her firm just raked in £1.8 billion for the British economy – in just 12 months.

The chief of the biggest firm in Britain, Her Majesty was worth £67.5 billion (US$90 billion) to the British economy in 2016. Yeah, that’s right, Lizzy has outperformed Vodafone, Barclays and Tesco. Paying for their goods and services is optional, of course. But funding Her Majesty’s foreign holidays and fancy frocks is not.

It’s probably the strangest transaction you’ll ever make – paying for a castle but not being allowed inside, and sending an elderly couple off in private jets, while scrimping all year to fly easyJet.

They do get a pretty sweet deal. 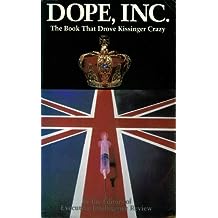 The Book That Still Drives
British Royals Mad, Is Back

[PDF version of this article]


For the first time since 1992, the underground bestseller book by the Editors of Executive Intelligence Review, that tore the lid off of the British Monarchy’s control over the world illicit dope trade, Dope, Inc., is back in print. Progressive Press has published a limited run edition of an expanded Dope, Inc., first published in 1978, updating the long and sordid tale of London’s top-down control of the trillion-dollar-a-year illegal dope trade, through 2009. This updated edition details the global explosion of heroin and opium from an Afghanistan ravaged by a British-engineered Thirty Years War, and the emergence of the massively armed Mexican drug cartels, operating freely, right smack on the U.S. border.

The current material is drawn from EIR‘s exclusive and ongoing coverage of these developments.

It also highlights the role of London’s own George Soros, in promoting dope legalization inside the United States, as he runs his own Dutch Antilles-based offshore hedge funds, to siphon black market cash through the global monetary system.

Soros, whose career was launched on Rothschild start-up capital, is also one of the numerous British channels of influence and control over President Barack Obama and the Democratic Party, through his Open Society Institute and Democracy Alliance; the latter, a corrupt billionaires club of hedge fund managers and other financial speculators tied to the Anglo-Dutch offshore system.

What makes the timing of the new edition of Dope, Inc. so spectacularly precise is the onrushing final collapse of the very Inter-Alpha Group-centered global financial system of the current British Empire, that thrives on the dope revenues, as vampires thrive on human blood. The Inter-Alpha Group, since its founding in 1971, as a European-wide banking cartel run by the circles of Lord Jacob Rothschild, has been at the very center of the British monarchy’s City of London and offshore monetarist empire. At their recent peak, Inter-Alpha controlled 70% of the world’s banking assets. The trillions of dollars per year in dope money and other criminal funds, that fuel the current British Opium War against the world, constitute a vital part of that offshore system. And without the Inter-Alpha system, the trillions of narco-dollars have no where to go!

The symbiotic relationship between the City of London-centered international financial system and Dope, Inc. was underscored by Antonio Maria Costa, who was until recently the executive director of the United Nations Office on Drugs and Crime (UNODC). Following the 2007-08 bursting of the global financial bubble, Costa highlighted the central role played by drug money, in maintaining that speculative financial system on life support.

In a Jan. 27, 2009 interview with the Austrian weekly Profil, Costa candidly observed: “In many cases, drug money is currently the only liquid investment capital to buy real estate, for example. In the second half of 2008, liquidity was the biggest problem the banking system had, and, therefore, this liquid capital [of drug flows] became an important factor.”

On the UNODC website, Costa emphasized, “with the banking crisis choking lending, these cash-rich criminal groups have emerged as the only sources of credit.”

While Costa correctly identified the addiction of the financial system to the dope revenues of its far-flung opium, cocaine, and marijuana plantations, he neglected to mention another pivotal feature of the Dope, Inc. apparatus, one that has immediate operational consequences.

Dope, Inc. is totally dependent on the British offshore financial centers to launder their trillions of dollars in criminal revenue. Without the top-down London control over these offshore centers, Dope, Inc. would choke to death on its own cash revenues.

Now, with the events playing out in Ireland, Spain, Portugal, Greece, and Italy, the entire Inter-Alpha system is on its last legs. And all of the dope money on the planet could not possibly bail the bankers out of their bankrupt state of affairs. If Inter-Alpha Group, and all they represent, goes out of business, then Dope, Inc. itself is doomed.

The Crown’s Rage Against LaRouche

Since no later than the 1978 publication of the first edition of Dope, Inc., the British royal family and its entire intelligence and courtier apparatus has been on a rampage against Lyndon LaRouche, the founder and contributing editor of EIR, and the man who commissioned the Dope, Inc. dossier in the first place.

Prior to the publication of Dope, Inc., Britain’s command over the global dope trade was largely unknown—despite the history of the British East India Company’s 19th-Century Opium Wars against China. Law enforcement and intelligence agencies, worldwide, viewed the global drug trade from the bottom up, as a function of underground criminal networks, operating in the shadows. Even after the August 1971 breakup of Franklin Roosevelt’s Bretton Woods system of fixed exchange rates, and the subsequent explosion of banking deregulation, leading to the emergence of such offshore financial centers as the Cayman Islands, the Dutch Antilles, the Channel Islands, the Isle of Man, and Dubai, the standing presumption was that dope money was laundered through suitcases of cash, deposited at gambling casinos, and smuggled across borders in the holds of ships, and in hidden compartments in cars and trucks.

If the banks were involved, it was the result of individual corruption by branch managers and tellers.

Dope, Inc. turned that fantasy world on its head, and cast a bright light on the London control of the global dope trade. And, along with the message that dope money laundering is a top-down process, engineered from the City of London, Dope, Inc. also addressed the strategic motive behind Britain’s promotion of mind-destroying drugs. As in the time of the Opium Wars, the goal of the Lords of Dope, Inc. was the subjugation of whole populations to a form of mental slavery—what the British Fabian Aldous Huxley graphically described as a “concentration camp of the mind.”

Speaking on behalf of the British oligarchy in 1961, Huxley told an audience at the University of California Medical School in San Francisco:

“There will be, in the next generation or so, a pharmacological method of making people love their servitude and producing dictatorship without tears, so to speak. Producing a kind of painless concentration camp for entire societies, so that people will, in fact, have their liberties taken away from them, but will rather enjoy it, because they will be distracted from any desire to rebel by propaganda, or brainwashing, or brainwashing enhanced by pharmacological methods. And this seems to be the final revolution.”

This was, in fact, the longstanding British Dope, Inc. policy: to eliminate human creativity and destroy the possibility of a sovereign nation-state system.

LaRouche and EIR earned the instant and profound hatred of the British Crown, from the day that Dope, Inc. hit the streets in 1979. Within months, a campaign of slander, mayhem, and attempted murder was launched against LaRouche, leading, ultimately, to LaRouche’s frame-up prosecution and jailing in 1989, by the Anglophile President George H.W. Bush.

In the course of London’s war to silent its most potent enemy, they, of necessity, exposed a vast network of assets and dupes, from Mafia attorney Roy Cohn, to the Anti-Defamation League of B’nai Brith, to Anglophile libertarian William F. Buckley Jr., to Wall Street spook John Train, to the last President of the Soviet Union, Mikhail Gorbachov.

Tracing these networks involved in the targeting of LaRouche and associates always led back to the same address: the British Crown!

As LaRouche has explained in numerous locations over many years, the issue is not the people of the British Isles, who have been as much the victims of empire as anyone. The issue is the “Brutish Empire,” the apparatus of Crown-chartered institutions, including the City of London and its offshore banks, insurance companies, shipping lines, and trading companies; the propaganda apparatus; and the penetration of Wall Street and Boston, where leading families, like the Weld family of LaRouche Federal prosecutor William Weld, made their fortunes as junior partners of the British East India Company in the opium trade, dating back to the clipper ship era of the 18th and 19th centuries.

It is fitting that Dope, Inc. is once again available to the American public at this moment. The British Empire is on its last legs, as the Inter-Alpha Group, itself, is drowning under the collapse of the biggest financial bubble in history, even as London’s Opium War against humanity targets nations on every continent with its mind-killing poisons, on an unprecedented scale. Now, more than ever, Dope, Inc. is a must-read combat manual for anyone who wants to survive the onrushing disintegration of that evil empire, and assure that civilization does not go down with it.