The Whole World Hates Amerika For Crimes Against Humanity and I Am Liable to Go Down With the Stupids Who Support the Military-Industrial Complex!

Vladimir Putin has sent missile attack defences to its border with North Korea.

President Trump reached out to the Kremlin to do more to help put a stop to Kim Jong-un’s nuclear programme, but Russia accused the US of antagonising the rogue state.

In the footage, the huge systems can be seen being unveiled on the border with North Korea. 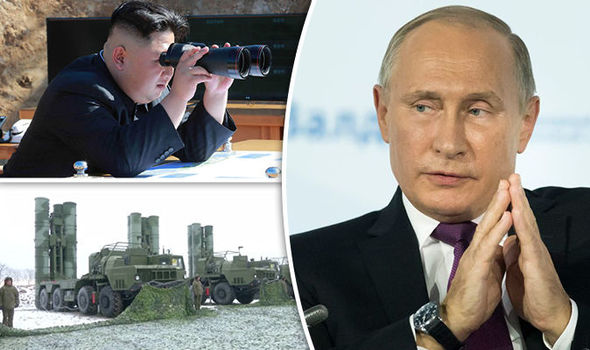 Alexei Morokov, Commander of Air Defence regiment, said: “Regular S-400 air-defence complex is entering into service and putting on alert towards the Primorsky direction, where it will be fully staffed by the newest anti-aircraft system.

“Personnel of the regiment have made the big way since first training.”

The Triumph missile-defence system can detect objects from up to 600km away and engage a target at 400km.

The new defence systems are aimed at destroying aircrafts, ground targets and ballistic and cruise missiles.

President Donald Trump used his Asia tour to try to improve relations with Vladimir Putin, but the pair are not united on solving the North Korea crisis.

As tensions grow over how to manage North Korea’s nuclear threat, it was announced that Russia would increase its number of ballistic missile testing next year.

Top Kremlin commander Sergei Karakayev said: “Five missile launches were carried out in 2017, with another one pending, and 12 launches have been planned for 2018.”

Russian border guards on patrol on the top of Zaozyornaya Hill at the Khasan crossing point on the Russian-North Korean border in the tri-border area where the boundaries of Russia, China and North Korea meet

President Trump has promised to put a stop to North Korea’s nuclear programme as fears grow over a potential war.

He said: “This situation should have been taken care of long before I got into office when it was much easier to handle. But it will be taken care of. We have no choice.”

Mr Trump has also said that he would “love” to have Putin’s help on helping to resolve the North Korea problem.

“We would love to have his help on North Korea. China is helping. Russia is not helping. We would like to have Russia’s help, very important,” he said.