5 Major Issues The Media Ignores During Trump’s State of the Union (Don’t Forget We Have Zionist News and the Zionists Wealth DID Increase-You Didn’t Think They Wanted You to Know Did You?) As President Trump gives his first State of the Union address, there is no doubt that it will receive an overwhelming amount of media coverage—but, as is typical with the mainstream media, the most important issues are the ones that won’t be covered.

Here are five major topics both Trump and the mainstream media will blatantly ignore during the 2018 the State of the Union address:

1. Trump will brag about the economy—but the country’s billionaires were the ones whose wealth increased in 2017

A study conducted by the global charity Oxfam revealed that in 2017, 82 percent of the new wealth created was owned by the top 1 percent, “while 0 percent has gone to the world’s poorest 50 percent.”

Oxfam Chief Executive Mark Goldring said he believes, “The concentration of extreme wealth at the top is not a sign of a thriving economy but a symptom of a system that is failing the millions of hard-working people on poverty wages who make our clothes and grow our food.”

A similar trend has been seen in the United States where Trump has been eager to use a number of “record” stock market closes to prove the country’s economic health. However, a study from NYU economist Edward N. Wolff noted that the richest 10 percent of Americans own 84 percent of all stocks.

70 Record Closes for the Dow so far this year! We have NEVER had 70 Dow Records in a one year period. Wow!

2. Trump may discuss the FISA memo, but there will be silence surrounding the staggering power he gave the FBI by signing the FISA Reauthorization Act into law

When Trump signed the FISA Reauthorization Act into law, he claimed that it was “NOT the same FISA law that was so wrongly abused during the election,” and that he would “always do the right thing for our country and put the safety of the American people first.”

However, reports noted that the government is actually following a pattern of legalizing practices that they have already been carrying out, which has been ongoing for years.

With the first new law in place, the FBI no longer has to apply for a warrant “when national security is involved, or when it determines that there is a ‘threat to life or serious bodily harm,” according to a report from the Intercept. The agency will also continue to have unlimited access to data collected by the NSA, even when it does not pertain to a criminal investigation.

3) The FBI performs those searches without a warrant.
4) The FBI does it so frequently they say the number is impossible to track.
5) The expanded surveillance powers Trump & Ryan are seeking protect the privacy of criminals under investigation, but not innocent Americans. #FISA https://twitter.com/MiekeEoyang/status/951482105493630978 …

3. Trump will likely criticize the media’s ongoing attempts at keeping “Russiagate” alive, but his administration’s actual collusion with foreign governments won’t be addressed

As the mainstream media continues to push the narrative that Russian hackers helped Trump win the 2016 election, it is ignoring some of the most obvious moments of collusion with foreign governments that have occurred in the last year.

When Trump was on the campaign trail, he claimed that if he was elected, he would hold Saudi Arabia accountable for the role it played in the 9/11 terrorist attacks.

However, once Trump was in office, his tune quickly changed, and Saudi Arabia became the first stop on his first foreign trip as president—paving the way for the completion of the largest single arms deal in U.S. history.

We should be attempting to end the aquisition of ballistic missiles from both Iran and Saudi Arabia not fueling an arms race.

There is an abundance of evidence that high level Saudis were complicit in 9/11. The 28 pages show that. Why would we give them arms?

4. Trump will brag about his support for law enforcement, but the statistics showing that more than 100 people already have been killed by police in 2018 will be ignored

Trump has always been vocal about his support for police, but he does not address the number of people killed by police, which stands at 105 deaths in the first 29 days of 2018, according to the Killed by Police database. 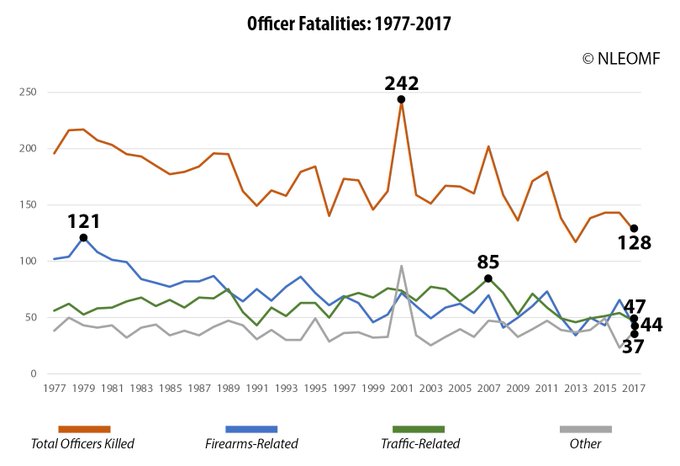 According to preliminary data, 128 law enforcement officers have died in the line of duty this year, decreasing 10 percent over the 143 officers killed in 2016.

5. Trump will highlight the importance of “National Security,” but his administration’s foreign policy is creating the opposite

In many ways, the Trump administration’s foreign policy has continued to prolong the wars that were both started and continued by the Obama administration. However, the number of civilian causalities has skyrocketed in the last year, and the mainstream media has remained eerily silent.

There is no doubt that the mainstream media will cover Trump’s State of the Union address, but given the coverage of Trump’s first year in office, it is not likely that his administration will actually be held accountable for the ways in which its decisions in 2017 have harmed the future of the United States.

Rachel Blevins is an independent journalist from Texas, who aspires to break the false left/right paradigm in media and politics by pursuing truth and questioning existing narratives. Follow Rachel on Facebook, Twitter, YouTube, Steemit and Patreon. This article first appeared at The Free Thought Project.