U.K.’s PM Theresa May is a Zionist Zealot 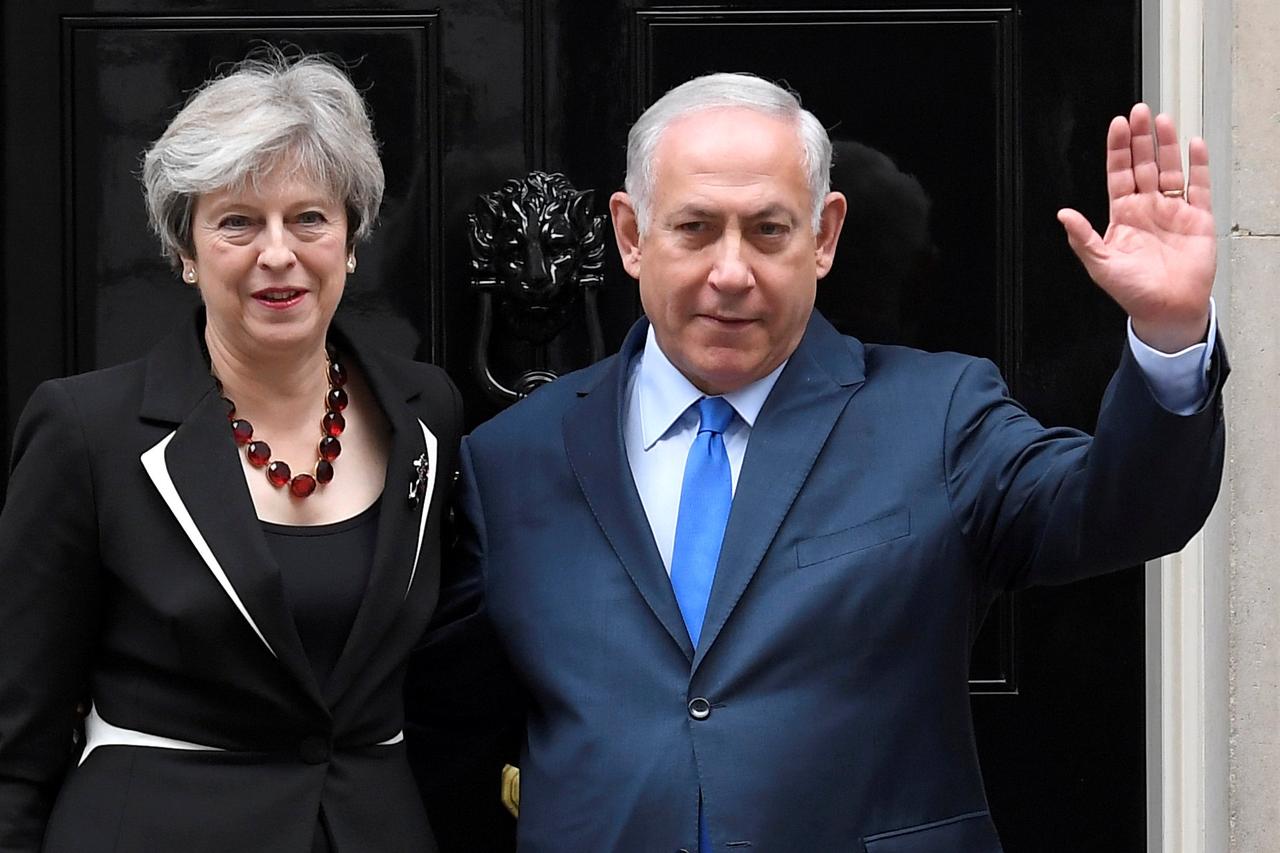 ed note–watchers of all this Jrama need to understand a few protocols surrounding all of this.

Judea, Inc is not in the least bit pleased with any talk of ‘peace negotiations’ with the Palestinians. Israel’s intention is to steal every last speck of dirt from the non-Jews in that part of the world as commanded be done by their insane and delusional religious teachings, to wit–

‘On that day the LORD made a covenant with Abraham, saying “To your descendants I give this land, from the river of Egypt to the great river Euphrates”…–Genesis, 15:18

‘And God spoke unto us saying, ‘Go to the hill-country and all the places nigh thereunto… in the Arabah, the hill-country and in the Lowland… in the South and by the sea-shore, the land of the Canaanites, and Lebanon, as far as the great river, the river Euphrates…Go in therefore and possess the land which the Lord swore unto your fathers, to Abraham, Isaac, and Jacob, unto them and to their seed after them…’ Deuteronomy 1:6–8

‘Every place whereon the sole of your foot shall tread shall be yours, from the wilderness, and Lebanon, from the river Euphrates, even unto the hinder sea shall be your border…’ Deuteronomy 11:24

‘…From the wilderness, and this Lebanon, even unto the great river, the Euphrates, all the land of the Hittites, and unto the Great Sea toward the going down of the sun, shall be your border…’Joshua 1:4

‘…When the Lord your God brings you into the land he swore to your fathers, to Abraham, Isaac and Jacob, he will give you a land with large, flourishing cities you did not build, houses filled with all kinds of good things you did not provide, wells you did not dig, and vineyards and olive groves you did not plant…’–Book of Deuteronomy

Having said that, if ‘peace negotiations’ are to take place, then what these Judaic interests prefer is that it continue along the same lines that it has for decades, vis a vis the American/European/UN model that has produced nothing and which–under the ‘cover’ of good will and of ‘wanting peace’–the thieving, rapacious Hebrews are free to continue chewing away, mouthful by mouthful of what remains of Syria Palaestina until they have it all.

HAVING SAID THAT, all can rest assured that these Judaic interests are NOT in the least bit pleased with the current political momentum that features Vladimir Putin as the ‘chosen’ mediator of the peace process. Putin, as a result of the success he has personally authored in defeating the western/Zionist backed ISIS terrorists in Syria, is now the most beloved leader in the world and as such carries incalculable weight in terms of his credibility. It was Putin who just a few months ago personally gave Netanyahu a copy of Josephus’ seminal work The Wars of the Jews (considered the best historigraphical description of Judea’s destruction by Rome as a result of those religious nutcases, the Zealots and Sicarii with whom Netanyahu is ideologically aligned who believed in all that Yahweh-commanded nonsense about Greater Israel) and who personally told Netanyahu that he needs to get out of the past and to start living in the present.

Therefore, May suddenly inserting herself into this process and begging Trump to involve himself in the ‘peace process’ needs to be understood for what it is–Judea, Inc pulling the strings within the government of the UK in trying to circumvent Putin and Russia becoming the dominant players in the much-needed resolution to the Palestinian/Israeli situation.