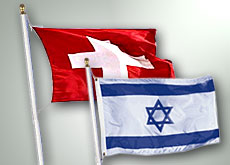 HAARETZ – Switzerland’s defense ministry has admitted sending staff to test reconnaissance drones in contested land held by Israel – an embarrassing blow for the neutral European country’s status as an honest broker in the Middle East.
Swiss officials visited an airfield in the Golan Heights region on three occasions in 2012, 2013 and 2015 to monitor tests of the Israeli-built Hermes 900 aircraft that they are buying for $265 million.