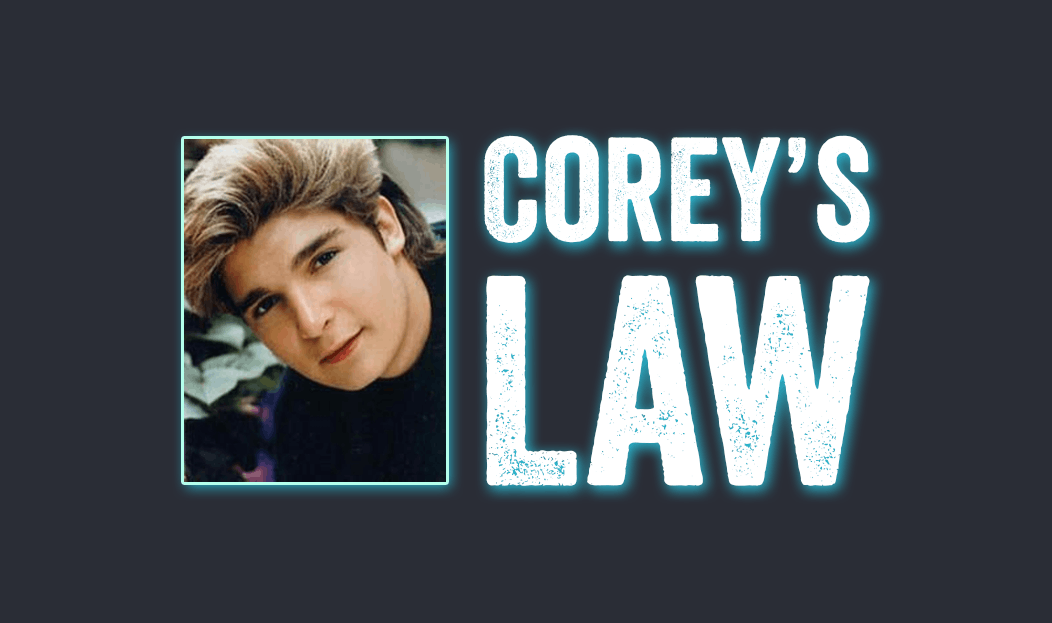 In this video, Luke Rudkowski of WeAreChange gives you the latest breaking news on the Al Franken KABC anchor scandal, Amazon along with Jeff Bezo’s becoming the most powerful entities in the world, Twitter censorship of baked Alaska, important financial news plus a lot more.

This video from researcher ‘The Black Child’ from 2014, called ‘Hollywood Casting Couch: Satan’s Playground’, contains some outrageous claims about how new stars are treated when they’re making their debut in the entertainment industry.

The graphic claims in this video would have seemed extreme or at the least an exaggeration of the truth, before the event of Harvey Weinstein being accused of sexual harassment on October 5th. 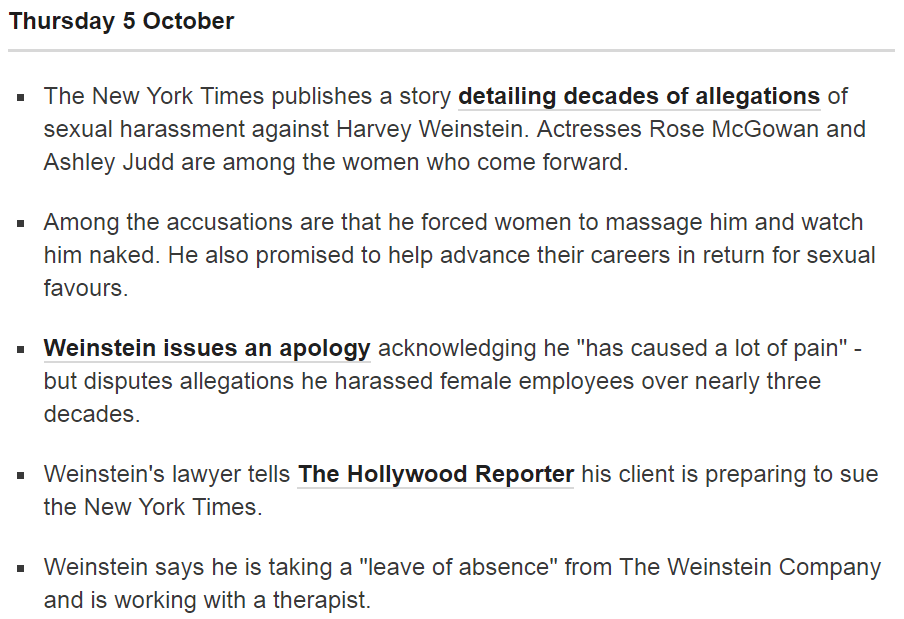 Corey Feldman, an actor who rose to fame in the 1980s, went on The View which broadcasts live from the ABC Broadcast Center in New York in 2013, to tell the world about the paedophiles in Hollywood. Barbara Walters told Feldman that HE was destroying an entire industry. As if that should be our main concern and not the protection of innocent children!

At the end of October Feldman launched his TRUTH Campaign. He started an indiegogo to raise money, the page explains:

“In his book, Coreyography, Corey describes what happened but it isn’t clear who exactly the predators are. The best way, he feels, in order to tell the whole story, is for Corey to come forward in the form of a film about his life.”

One of the main barriers to Feldman getting justice is the statute of limitations. wksexcrimes.com explains:

“A statue of limitations is essentially a time limit on when charges can be filed against you for a crime. This time limit exists because evidence, including the recollection of witnesses and the parties involved, deteriorates over time.”

The information below seems to suggest that Feldman is out of time to prosecute. 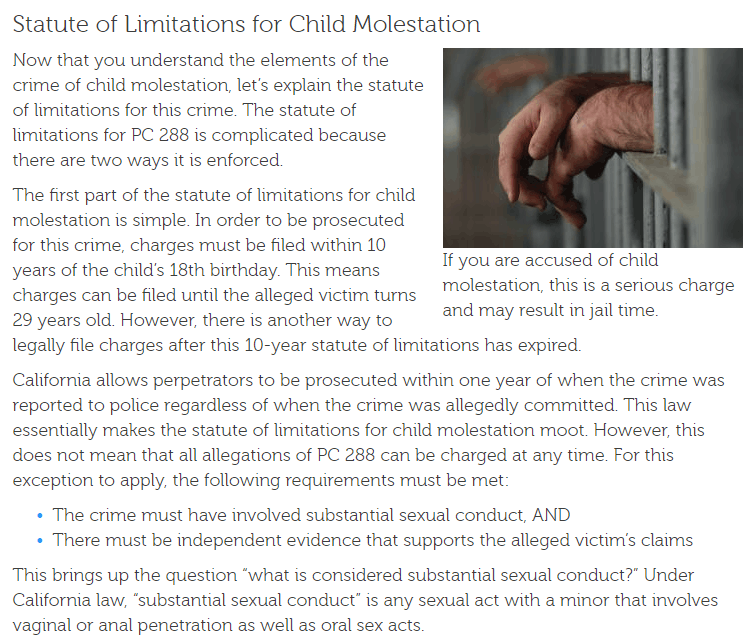 Today Feldman tweeted about a new petition that he really feels he can support.

NOW THIS IS A MOVEMENT I CAN FULLY SUPPORT! PLEASE SHARE WITH EVERY1 U KNOW: Corey&amp;#039;s Law https://petitions.whitehouse.gov/petition/coreys-law …

That link takes you here… 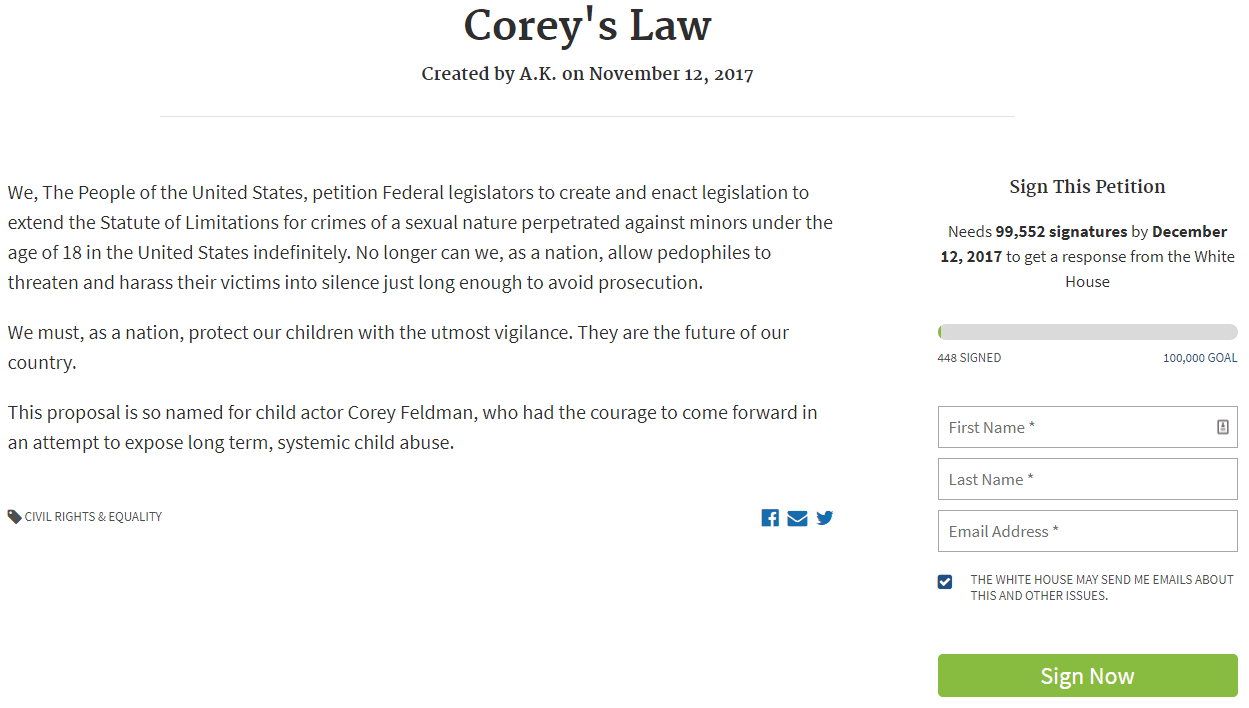 Charisse, a freelance writer and others questioned the wording of the petition on Twitter and suggested changing it.

NOW THIS IS A MOVEMENT I CAN FULLY SUPPORT! PLEASE SHARE WITH EVERY1 U KNOW: Corey&amp;#039;s Law https://petitions.whitehouse.gov/petition/coreys-law …

I think the petition should be to “remove” the statute of limitations, not extend it. Can the wording be changed?

I MUST ADMIT, IM FEELING VERY DISCOURAGED. THE NEEDLE IS BARELY MOVING, I HAV BEEN VIRTUALLY IGNORED BY HOLLYWOOD @ THIS POINT. I HAV NO WEALTHY INVESTORS. I APPRECIATE EVERY 1 OF U WHO HAS DONATED, BUT @ THIS POINT I DONT HAV ENUFF 4 SECURITY 4 MY FAM. LET ALONE MAKE A FILM!

If you want to see Feldman’s explanation of what he plans to spend the money on, see his open letter below.

AN OPEN LETTER 2 MY FRIENDS IN HOLLYWOOD & BEYOND…

The trend to expose Hollywood and the music industry has gained more support since the accusations against Weinstein, with singer Kaya Jones coming forward too. Jones, a past member of the popular group ‘The Pussy Cat Dolls’, who broke up in 2010, came forward with descriptions of exactly the same type of treatment as described in The Black Child video above.

My truth.I wasn’t in a girl group. I was in a prostitution ring.Oh & we happened to sing & be famous. While everyone who owned us made the $

How bad was it?people ask-bad enough that I walked away from my dreams,bandmates&a 13 million dollar record deal.We knew we were going to#1

To be apart of the team you must be a team player.Meaning sleep with whoever they say.If you dont they have nothing on you to leverage

Yes I said leverage. Meaning after they turn you out or get you hooked on drugs they use it against you.Correct.Victimizing the victim again

Why don’t we report it? Because we are all abused! I personally have been warned if I tell I will … you know end up dead or no more career

Pictured here a month after these tweets came out. 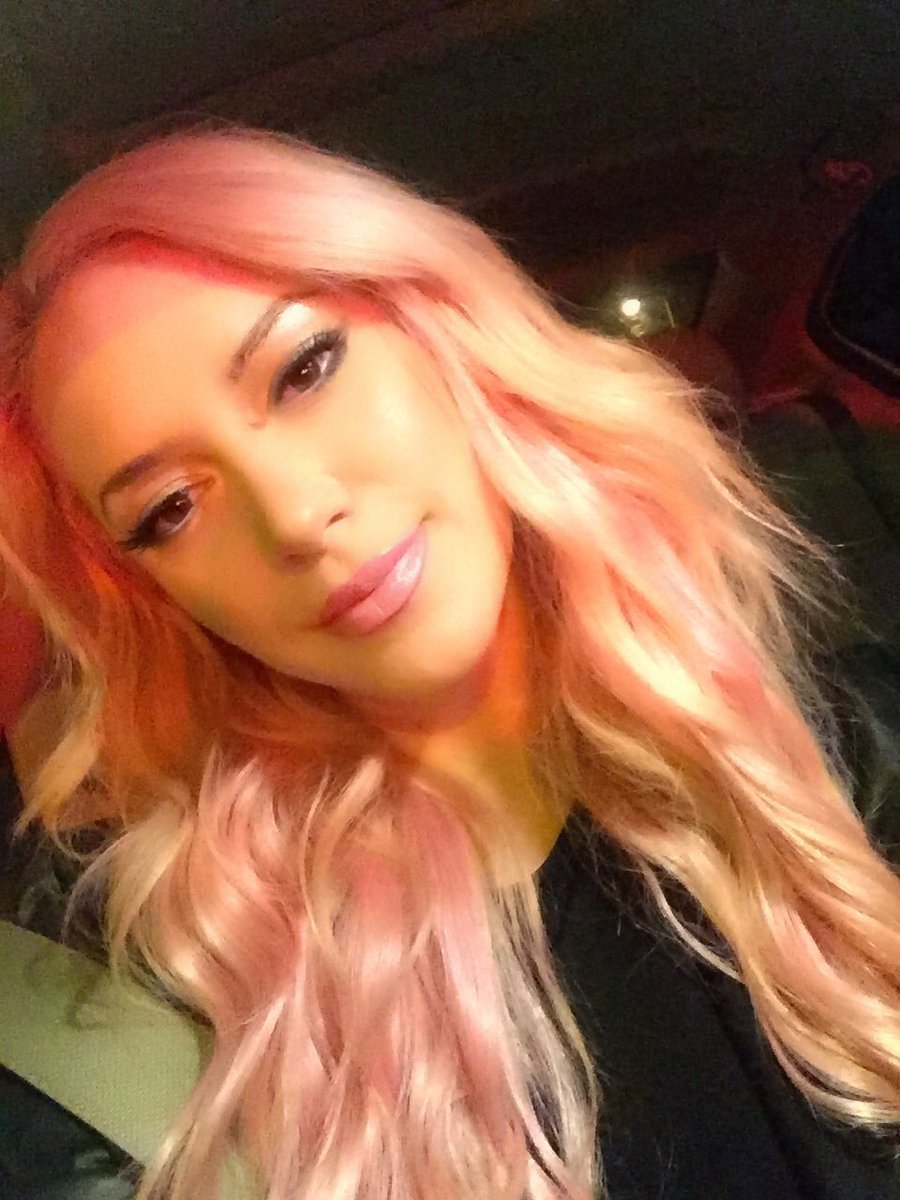 Sometimes it’s not about the pain but the journey to ones self. I finally have faced me. No lies. No fear. Just free

This problem of pressure, exploitation, control and abuse seems to stem from the fact that Hollywood and the music industry has gate keepers. If you want the contract then you may be subject to the casting couch and at any age, as Feldman tells us!

We need to reject the gate keepers and find ways to create and show our art ourselves. With the internet, this is fast becoming a reality.

Let us know what you think about this in the comments. How do you feel about what happened?

MAKE SURE TO CHECK OUT LUKE’S LATEST VIDEO HERE!

OH YEAH, since we are not corporate or government WHORES, help us out:

We gratefully accept Bitcoin too: 12HdLgeeuA87t2JU8m4tbRo247Yj5u2TVP

Donate on our site: https://wearechange.org/donate

WE ARE CHANGE MERCHANDISE