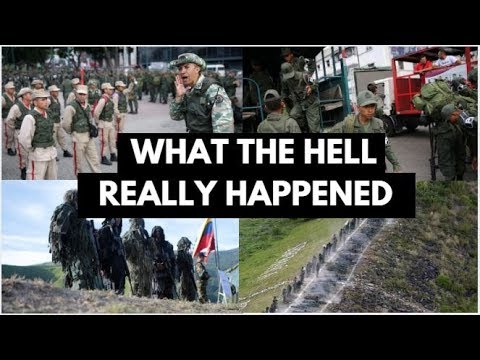 Welcome back amazing and beautiful human beings. Today is August 27th, 2017 a Sunday which means it’s time for another WeAreChange Weekly Wrapup where we give you all their important news you should know about without all the dumbass distractions. This week was pretty crazy. Venezuela readies for U.S. invasion, and there are two legal court battles with H3H3 and Sargon of Akkad. There is also more legal trouble for Debbie Wasserman Schultz. Oh and the utter destruction of freedom of speech, self-expression, on something that used to be the free and wide open Internet.

Let’s start today’s broadcast with the next potential war. This occurring as the President of Venezuela Maduro said that relations between the United States and Venezuela are at the lowest point ever. 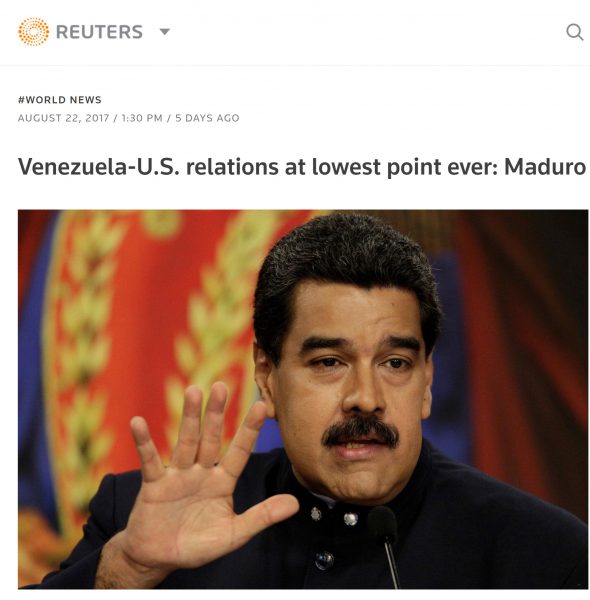 Right now the Venezuelan president is readying his military by launching massive military wargames and organizing civilian volunteers. This is in preparation for a potential conflict with the United States. 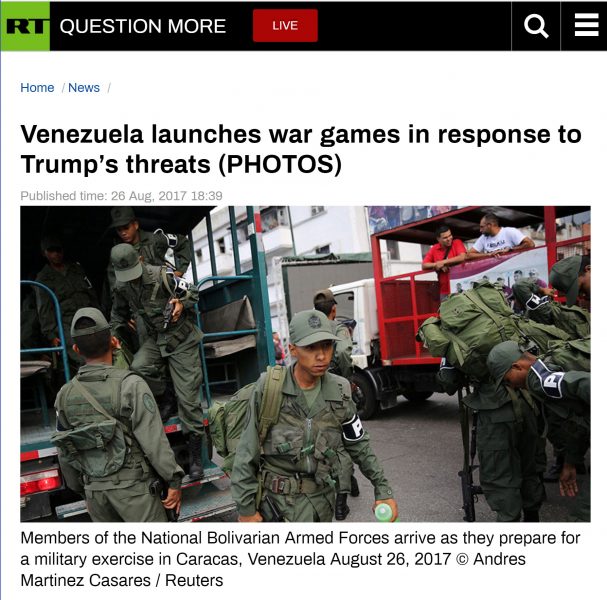 Why is this happening?

Trump: “Well I’m not gonna rule out a military option. We have many options for Venezuela this is our neighbor. This is you know we’re all over the world, and we have troops all over the world. In places that are very, very, far away. Venezuela is not very far away, and the people are suffering, and they’re dying. We have many options for Venezuela including a possible military option if necessary.”

Reporter: “Would that would be a U.S-led military operation?”

Trump: “We don’t talk about it, but a military operation and military option is certainly something that we could pursue.”

Donald Trump is threatening the country of Venezuela with war because of alleged human rights violations when it comes to the Venezuelan government persecuting people who are protesting against them. 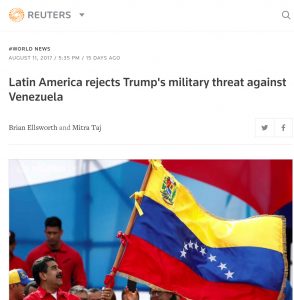 If that’s the excuse, he’s using I wonder if he’s ever heard of a country called Saudi Arabia? Many Latin American countries have rejected Donald Trump’s military threat against Venezuela, and Donald Trump wasn’t lying when he said the US military is all around the world. We just found out yesterday that one soldier is missing after a US Blackhawk helicopter crashed off the coast of Yemen. 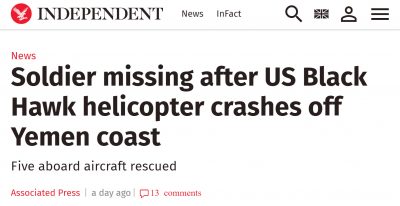 My response to that is why the hell are US soldiers in Yemen in the first place? Are they fighting alongside Saudi Arabia and al-Qaeda against the mainly Iranian Houthi Shia rebels in that country? A war that has caused mass human suffering, starvation, and incredible human rights violations.

This again shows the double sided hypocrisy of U.S. foreign policy as perpetrated and continued by Donald Trump. I’m sorry Trump supporters, but you have to wake up to the cold reality and the facts of who Donald Trump promised he would be and who he is right now.

In further horrible Donald Trump news, we have Congress that just passed a bill allowing warrantless searches of homes in the United States. 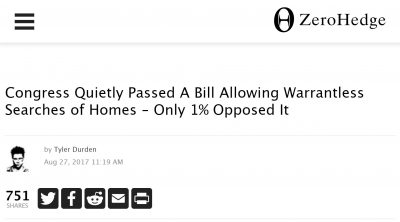 A bill that was just signed into law by Donald Trump. Very noteworthy is that the U.S. mainstream media that frequently harps on Donald Trump when he eats two scoops of ice cream but for some reason have forgotten to criticize him about getting rid of our basic human rights. This now affects the people of Virginia, the state of Maryland, and of those living in the District of Columbia. Police can now search your home without a warrant and violate your basic freedoms that are supposed to be protected underneath the US Constitution. I think that should put some things in perspective to who the mainstream media are and for what purpose they serve. Ultimately they have a very clear-cut agenda, and it is not one that benefits you and me. 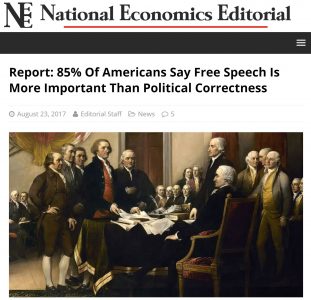 In this new digital age, it’s not just the government that we have to worry about suppressing our freedoms. It’s a lot bigger entity called the corporatocracy. Freedom of speech is the basic core principle behind the United States. We are slowly seeing that freedom of speech being taken away by conglomerate monopolies. Organizations like Alphabet who along with Google and YouTube are increasing the velocity of online censorship.

We’re hearing that Google has just begun its biggest ever crackdown on supposed extremist content. Including videos from alleged KKK and ISIS members. 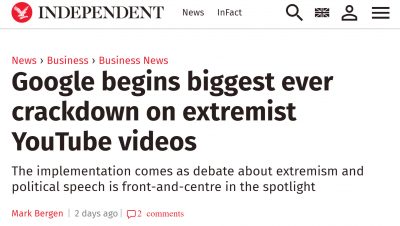 That’s not the truth because I’ve been personally hit by their latest crackdown effort. It’s not just me, but also former Congress member and presidential candidate Ron Paul were hit as well. 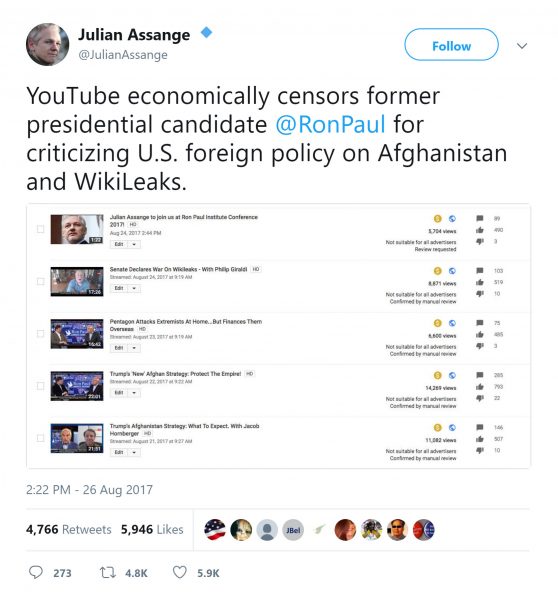 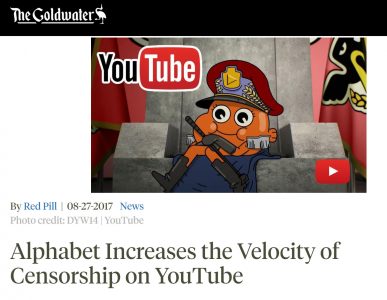 This has affected other non-controversial YouTubers like Philip DeFranco. 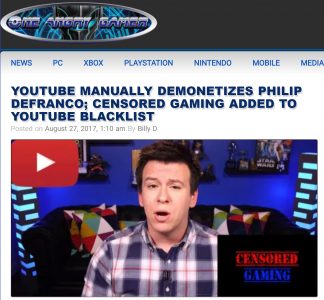 Some people want to make this a left and right agenda item, but in reality, it’s not just conservatives that are being hit but also independent YouTube channels. It’s killing our ability to earn a living and to continue to make YouTube videos.

This crackdown is only getting worse, and as I reported two days ago, YouTube has just begun isolating offensive videos. 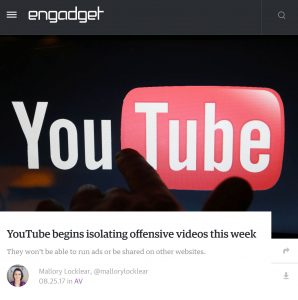 They have started with a very political video that was a contract legal video but now cannot be liked, embedded, or earn any money. 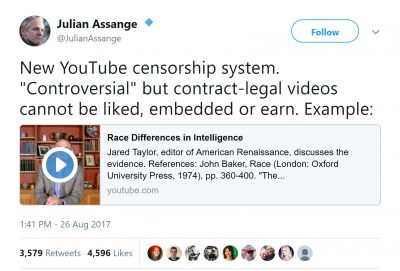 They also disabled all the comments. You can’t even see the person who made the videos channel through that particular video. That video was singled out for political reasons.

This is what pisses me off that pedophile channels on YouTube that exploit children were allowed.

They still monetized them even though they were very disturbing, dark, sinister, horrid, videos but yet those videos were not a priority for YouTube to go after and censor. This shows you exactly what this purge and this crackdown is all about.

There’s a very important lesson that we all need to learn. I may not agree with some people on YouTube and their opinions. So long as they’re not exploiting or hurting children, I would always stand up for their right to share the opinions and arguments even if I disagree with them. The right to be heard is the only way to develop and evolve humanity. Even to hear out the stupid opinions online. Once you start supporting laws and policies that suppress any ideas that you think are bad, when you silence those people you disagree with, those same policies and laws could be used against you.

It’s not just censorship against the right that is happening there’s a bigger play being made here by the establishment. We’ve seen Germany that banned a far left website that they accuse of promoting violence.

We are also seeing laws being changed in England that are making online hate crimes be treated just as serious as offline offenses. We are also seeing similar initiatives being pushed by local governments here in the United States. Ultimately what’s happening is the mainstream media emotionally manipulates the public dividing and conquering people against nationalities, races, and sexes making us fight amongst ourselves. This is occurring to the extent where people on the left and right are going to government and asking them to take away the freedoms of others. The government would gladly take away more freedoms away from these people, and that is what is happening.

It’s all a big distraction, a divide and conquer game which ultimately benefits the people in power. They will gladly oblige the triggered people who are demanding more power and authority from the state to do their bidding. I think more people need to desperately understand that this play is being made against us all.

Let me know in the comment section below if you disagree or agree with me on this topic.

Now moving forward in other YouTube news we found out yesterday that popular YouTuber Karl Benjamin who goes by the name of Sargon of Akkad is being sued in US courts for “copyright infringement” and accused of perjury. 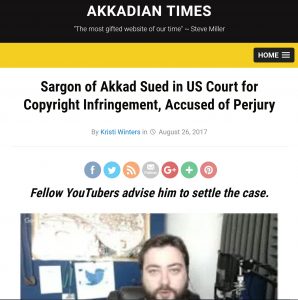 Left-wing YouTuber Akilah Hughes is suing Sargon of Akkad for using her video in one of his videos. This is going to be a very instrumental court case that will, of course, affect all YouTubers. We will be following it very closely.

At the same time this week we’re finding out that another popular YouTuber H3H3 productions just won a major copyright lawsuit again another YouTuber that they made fun of. After a year-long battle, a judge ruled that they were in the right for making a satire video making fun of another YouTuber. 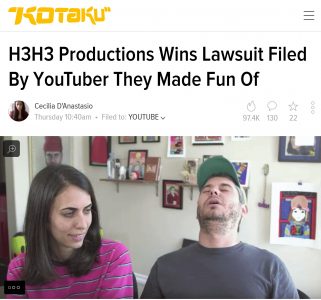 It did not violate any copyright infringement since the video involved critical commentary. It was not a market substitute to the original YouTuber who was made fun of.

H3H3 made a video about this that gathered 3 million views in over 12 hours which exposed how YouTube’s trending homepage is being completely manipulated. This is not a surprise to me that Alphabet, Google, and YouTube would do this since. I think it’s clear now that they don’t have any ethical or moral background as a company.

In other troubling news, we have the former DNC head and Hillary Clinton aide who is in hot water. The court admitted that it was the DNC and Debbie Wasserman Schultz that rigged the primaries against Bernie Sanders in the last presidential election. 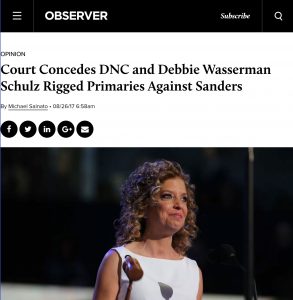 Debbie Wasserman Schultz IT staffer is also in trouble after the information has come out that he may have compromised sensitive data to foreign intelligence agencies. 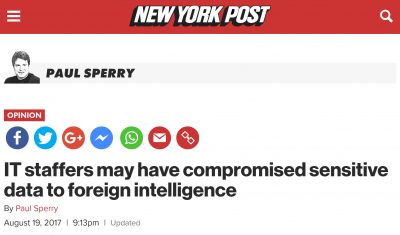 He was caught trying to flee the country and now his indictment ha expanded by four more counts. 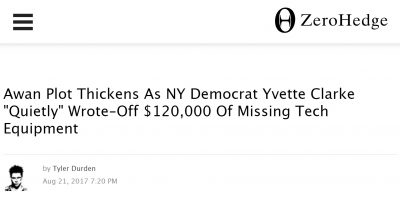 This case has been fascinating to watch especially with all the recent developments. A lot of details that people are putting together surrounding the death of Seth Rich. There’s something up here, and it’s not just me saying so. It’s also a former US Attorney General that said: “There is something very strange going on here.” I’m gonna be following that story very closely so if any concrete developments come from that expect to here.”

Subscribe and stay tuned. I want to thank all the sponsors of this show. Which are you the people who donate five dollars a month on https://wearechange.org/donatewearechange.com/donate. This is our own Patreon system that we set up on our website. This allows us to be fully independent, fully free to express and say what we want. Unless YouTube cracks down on us even more which we are expecting.

I just wanted to end that I’m not really that worried about it. Big institutions like Myspace came and went. Institutions like Facebook and Google hinge on us using their platforms. In this time of censorship, we have to understand that we the people have the power.

That’s why it’s important to spread alternatives like steemit.com/@lukewearechange to let people know about other alternatives. These big massive social media companies have no power unless we are enabling them to have it.

I want to be here doing what I am right now. I love you guys thank you again.

OH YEAH since we are not corporate or government WHORES, help us out:

We gratefully accept Bitcoin too: 12HdLgeeuA87t2JU8m4tbRo247Yj5u2TVP

Donate on our site: https://wearechange.org/donate

WE ARE CHANGE MERCHANDISE