VLADIMIR PUTIN’S METEORIC RISE TO POWER began in 1996 when he was invited to Moscow from St Petersburg in his role as deputy mayor to become a member of Yeltsin’s inner circle known as “the family.”

Impressed with his administrative abilities, his cool efficiency, and apparent loyalty, Yeltsin appointed Putin as the deputy head of his presidential administration.

In this position, Putin kept a low profile. Far from being charismatic, with his expressionless mask-like face, rarely smiling, and speaking softly, Putin became known amongst his peers as the “grey cardinal” – a man wielding power behind the scenes. (Putin’s personal style has since changed into a charismatic, uninhibited and aggressive style.)

Suddenly, in Mid-August of 1999, Putin was catapulted into the political spotlight. In a quick response to incursions by Chechen Islamic militants into neighboring Dagestan, Putin ordered the Russian army to expel them. Then, identifying Chechens for a series of apartment bombings in Russian cities, Putin ordered the troops into Chechnya to root out the rebels. “We shall not allow our national pride to be trod upon,” Putin declared.

ON MANY OCCASIONS after this, Putin, seeing himself in the tradition of the Russian Orthodox Christian czars, voiced his belief in a strong state as a “traditional Russian value” and inherent in “Russia’s genetic code.”

Soon Vladimir Putin’s moment in history had come. On December 31, 1999, Yeltsin, recognizing his bleak political future, announced his early resignation and appointed Putin as acting President with elections slated for March 26, 2000. Giving the Russian people a renewed sense of self-respect, Putin emerged as victor in the elections with 53% of the vote. View Entire Story Here & Here.

Putin has since ruled Russia with an iron hand, purging the Jewish oligarchs with their grip on Russian resources & the media, transforming the energy industry into a geopolitical force, building an Orthodox Christian society, and restoring the people’s confidence in the country. Expanding upon these achievements, Putin is now emerging as victor over the Zionist-controlled West. And no one fears Putin more than the Jews. 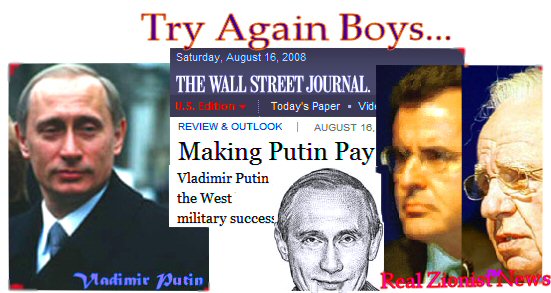 MAKING PUTIN PAY? – HA HA
ACCUSING PUTIN OF BRUTAL AGGRESSION in the Georgian conflict of August 2008, when in reality Putin was acting in self-defense, the Jewish-owned Wall Street Journal was all in a rage in its hostile article, Making Putin Pay. (Rupert Murdoch’s mother was a Jew and CEO Peter Chernin is a Jew.)

The article listed a number of nasty suggestions to “punish” Russia – such as “exploring the vulnerability of Russian assets abroad” and “making life difficult for the holders of those assets.”

Concluding with an overt threat to Putin: “America and its allies must make Putin pay a political penalty for Georgia,” the Journal failed to mention that America, completely broke and in the hands of resource-bleeding Jews, no longer has the political clout with its allies to punish any country stronger than nations like Iraq and Afghanistan.

Now, instead of the Zionist West ‘making Putin pay,’ Vladimir Putin, with his expanding influence west of Russia’s borders, is laughing all the way to the geopolitical bank.

With Yushchenko’s popularity in decline, Medvedev is signaling in his open letter to any potential new president in opposition to Yushchenko in Ukraine’s upcoming January 2010 elections, just what the rules of acceptable conduct are.

The hope is that the elections will oust Yushchenko and a pro-Moscow administration will be elected, preempting the Zionist Jews’ agenda with their puppet Yushchenko.

In his letter, Medvedev chastises Yushchenko for “supplying Georgia with arms in its conflict with Russia.” Medvedev then censures Yushchenko for “conspiring” with the EU against Russia on natural gas issues, “blocking” the activities of its Black Sea Fleet in Crimea, “suppressing” the Ukrainian Orthodox Church element that is subordinate to Moscow, and “aspiring” to join NATO.

Responding to the Zionist West’s criticism of the letter, Putin, who recently dispatched the Orthodox Patriarch of Russia on a tour of Ukraine, insists the conflict is with the leadership of Ukraine and not with “our longtime Orthodox brothers” – the Ukrainian people.

Picking up the cue from the open letter, Ukraine’s opposition leader, Viktor Yanukovich, who lost the 2004 Orange Revolution election to Yushchenko, predicted that he would win the presidency in January and promised to improve ties with Russia. “We have to radically change relations with Russia. This is the will of the Ukrainian people,” Yanokovich said.

YET ANOTHER “WILL” of a nation tilting towards Russia was recently highlighted in a meeting between German Chancellor Angela Merkel and Russian President Medvedev on August 14, 2009. That “will” is to have Russia bailout ailing German firms such as the Wadan Dockyards, the Dresden-based Qimonda Chipmaker, and to buy the economically-distressed Opel car maker. View Entire Story Here & Here.

In other words, in Putin’s Russia, real geopolitik means helping friendly neighbors while Zionist Jews lose control of yet another partner in their crimes against humanity.

And: Russia And The Future Of Ukraine Click Here

And: Is Putin A True Christian Leader? Click Here