Banks ARE the Problem: Glass-Steagall to Save Ourselves From Banking Holocaust!

The worst news for the economy might be coming from banks, not retail –CNBC
“Loan issuance declined in the first quarter from the previous three-month period, the first time that has happened in four years, according to an SNL Financial analysis of bank earnings reports filed for the period….Commercial and industrial lending, considered an economic bellwether, usually pops this time of year as companies prepare for the construction season again. Instead, 2017 began with just a 0.9 percent rise in C&I transactions, a gain that couldn’t offset the normal seasonal drop in credit card loans. In addition, the lending picture was hampered by an unusual decline in auto loans, which fell for the first time since banks started reporting on them in 2011….Where the lending data fit in is a puzzle for the Trump administration, which believes a pro-growth agenda that has languished in Congress will spur more growth. If it doesn’t, that could jeopardize the stock market rally….Much of the focus thus far has been placed on weak retail numbers as the big econ! omic stumbling block. But an unwillingness by consumers and businesses to borrow could be a bigger problem.” 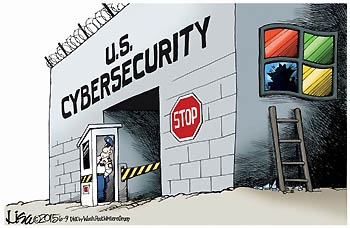 A Foretaste of the Coming Cyber-Apocalypse? –PontificationBlog
“The cyber-attack began last Friday worldwide, causing computer chaos in at least 150 nations and more than 200,000 computers, hitting banks and other companies. This is only the latest of what could be many doomsday attacks to come. ‘In 2017, hackers infected the computers of 140 banks in 40 countries with a program that let the criminals order bank ATMs to spit out untold millions into the paper bags of waiting accomplices,’ Craig R. Smith and I reported in our free 2017 White Paper Don’t Bank On It!, which updates and summarizes our book of the same name. ‘In 2016, North Korean hackers put a bug into the computers of SWIFT, the Society for Worldwide Interbank Financial Telecommunications in Belgium, an electronic clearinghouse for global bank transfers,’ we wrote. ‘The hackers had SWIFT issue false documents that tricked banks in several nations into giving their agents a combined $8! 1 Million, including $12 Million from Wells Fargo Bank in the U.S.’ The attack last Friday shut down ATMs (Automatic Teller Machines) in regions of China, leaving citizens without access to their money. Credit cards failed to work at many gas stations. The Bank of China was a target….Your bank account today is merely electronic blips in a computer that can be stolen, scrambled, or erased by a smart enough individual or government hacker. (China employs 125,000 soldiers to do full-time cyber warfare.) And our government is rapidly moving to a ‘cashless’ society in which all dollars will be digital and ‘virtual,’ i.e., unreal. The only way to escape a future computer apocalypse will be to convert dollars to real, hard money such as gold – which cannot be stolen or held for ransom by a few hacker strokes on a computer keyboard.”