The ongoing developments in the Balkans evoke strong memories of 1914, RIA Novosti contributor Dmitri Dobrov noted, warning that the region may soon turn into the powder keg of Europe again. It appears, however, that neither Washington, nor Brussels wants to make it easier for Balkan states to ease growing tensions.

“Religious and ethnic contradictions have once again intensified in the territory of former Yugoslavia; [the region] sees ethnic conflicts flaring up more and more often,” Dobrov wrote in his recent op-ed.

“According to the Heidelberg Institute for International Conflict Research (HIIK), the Balkan region has been recently struck by 18 major and minor conflicts,” the Russian journalist pointed out.For instance, Dobrov specified that contradictions continue to simmer between Slovenia and Croatia over border issues in the Piran Gulf; Serbia and Croatia still cannot reach a compromise on the Island of Sarengrad and Island of Vukovar; Republika Srpska continues its efforts to join Serbia.

Meanwhile, the self-proclaimed Republic of Kosovo remains an apple of discord between Albanians and the Serbs.

“Experts say that relations between the republics of the former Yugoslavia are now worse than ever since the Yugoslav Wars of 1991-2001. More and more republics and national entities in the Balkans are calling for redrawing borders and creating federations in already existing states,” Dobrov said.

According to the journalist, some observers have drawn historic parallels between the ongoing developments in the region, the beginning of the First Balkan War of 1912-1913 and the collapse of Yugoslavia in the 1990s.

“It is quite obvious that the 1990s policies of Washington and Brussels aimed at reconciling warring parties and creating multiethnic states in the Balkans have collapsed,” Dobrov stressed.

“In light of this a number of Western analysts suggest redrawing the region’s map before it’s too late,” the journalist noted.”They propose, in particular, handing southern regions of Serbia inhabited by 100,000 Albanians to the Albanian Kosovo and ceding northern Kosovo, where 50,000 Serbs live, to Serbia. Meanwhile, one and a half million residents of the Republika Srpska in Bosnia and Herzegovina demand that the republic join Serbia. But the most explosive is the movement of the Albanian minority in Macedonia, where the situation has sharply escalated — the country is on the brink of a civil war,” Dobrov said.

The journalist explained that the concept of the so-called “Greater Albania” may become the trigger for a new Balkan conflict. 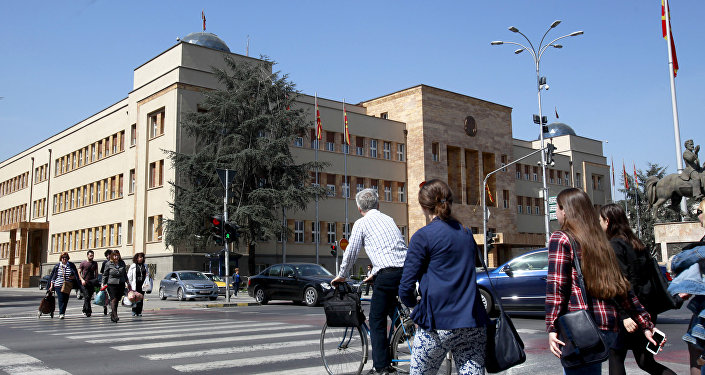 The Greater Albania doctrine says that the territories in southern Montenegro, southern Serbian territories including Kosovo and the Presevo Valley and northwestern parts of Macedonia should be incorporated in the existing Republic of Albania.Dobrov warned that the internal Macedonian conflict may escalate into a pan-Balkan conflict, since Albanians living in Macedonia, Kosovo and Montenegro coordinate their actions with ultra-nationalists in Tirana who dream of creating a Greater Albania.

“The total number of Albanians in the Balkans amount to more than eight million people, including three million in Albania itself, one million and a half in Kosovo and Serbia and over half a million in Macedonia,” the journalist remarked.

“The situation evokes strong memories of 1914, when the Balkans were called the powder keg of Europe,” Dobrov wrote, adding that the increasing isolationism trend in the US coupled with weakening EU influence has created preconditions for a new separatist movement in the Balkans.

© AP PHOTO/ BORIS GRDANOSKI
People protest in front of the Parliament building in Skopje, Macedonia, on Tuesday, March 21, 2017. Tens of thousands of demonstrators gathered in Macedonia’s capital, Skopje, Tuesday to protest a visit by a European Union envoy who is trying to break the political deadlock that has left the country without a government for three months

However, it seems that neither Brussels nor Washington wants to make it easier for Balkan states to tackle the looming crisis.

The EU and NATO leadership have been recently spotted meddling in Macedonia’s domestic affairs, pressuring Skopje into accepting the demands of neighboring Albania and change its constitution to strengthen the positions of the Albanian minority in the country.For their part American politicians have no scruples about interfering in Macedonia’s political conflict. In February, chairman of the US Foreign Affairs Subcommittee on Europe, Eurasia and Emerging Threats Dana Rohrabacher told Albanian TV Channel Vizion Plus that the country should be partitioned and “Kosovars and Albanians from Macedonia should be part of Kosovo.”

In early March the Russian Foreign Ministry warned the US and EU against meddling in the political crisis in Macedonia.

“The West is using the Albanian minority in an attempt to bring to power in Skopje the defeated opposition, which approved the Albanian ultimatums leading to the erosion of the country’s constitutional principles. The ongoing destructive attempts to impose schemes from the outside, contrary to the will of the Macedonian voters, can only aggravate the situation,” Russian Foreign Ministry spokesperson Maria Zakharova said on March 2.

But that is not all: the self-proclaimed Republic of Kosovo has signaled its willingness to create a “national army.” According to Milovan Drecun, chairman of the Serbian parliament’s Committee for Kosovo and Metohija, it was the US and NATO who backed Kosovo’s push to create its own armed forces.”It is necessary to point out to everyone that the [possible] Kosovo national army would become an additional destabilizing factor in the already destabilized situation,” Drecun told Sputnik Serbia.

On April 3 the Russian Foreign Ministry denounced the initiative to create armed forces for Kosovo as irresponsible, calling attention to the fact that the move goes against the already existing agreements.

“The emergence of a new force component in the form of ‘Kosovo armed forces’ in the Balkans would have contradicted the Florence agreement, which is aimed at maintaining regional stability with the assistance of the OSCE [Organization for Security and Co-operation in Europe],” Maria Zakharova warned.