Real Meaning of Abaddon and Apollyon

The Hebrew term Abaddon (Hebrew: אֲבַדּוֹן‎‎, ‘Ǎḇaddōn), and its Greek equivalent Apollyon (Greek: Ἀπολλύων, Apollyon), appears in the Bible as a place of destruction. In the Hebrew Bible, abaddon often appears alongside the place שאול (sheol), meaning the realm of the dead. In the New Testament Book of Revelation, an angel called Abaddon is described as the king of an army of locusts; his name is first transcribed in Greek (Revelation 9:11—”whose name in Hebrew is Abaddon, The Angel of Death.” (Ἀβαδδὼν), and then translated (“which in Greek means the Destroyer” (Ἀπολλύων, Apollyon))). The Latin Vulgate and the Douay Rheims Bible have additional notes (not present in the Greek text), “in Latin Exterminans”, exterminans being the Latin word for “destroyer”.

Pictured above is Apollyon battling a Christian.

According to the Brown Driver Briggs lexicon, the Hebrew abaddon (Hebrew: אבדון; avadon) is an intensive form of the Semitic root and verb stem abad (אָבַד) “perish” (transitive “destroy”), which occurs 184 times in the Hebrew Bible. The Septuagint, an early Greek translation of the Hebrew Bible, renders “abaddon” as “ἀπώλεια”,[1] while the Greek Apollyon comes from apollumi (ἀπόλλυμι), “to destroy”. The Greek term Apollyon (Ἀπολλύων, “the destroyer”), is the active participle of apollumi (ἀπόλλυμι, “to destroy”),[2] and is not used as a name in classical Greek texts.[3]

The Christian scriptures contain the first known depiction of Abaddon as an individual entity instead of a place.

Revelation 9:11 And they had a king over them, which is the angel of the bottomless pit, whose name in the Hebrew tongue is Abaddon, but in the Greek tongue hath his name Apollyon. KJV, 1611

In Revelation 9:11, Abaddon is described as “Destroyer”,[6] the angel of the abyss,[6] and as the king of a plague of locusts resembling horses with crowned human faces, women’s hair, lions’ teeth, wings, iron breast-plates, and a tail with a scorpion’s stinger that torments for five months anyone who does not have the seal of God on their foreheads.[7] (Note the Revelation 9:11)

The symbolism of Revelation 9:11 leaves the identity of Abaddon open to interpretation. Protestant commentator Matthew Henry (1708) believed Abaddon to be the Antichrist,[8] whereas the Jamieson-Fausset-Brown Commentary (1871) and Henry H. Halley (1922) identified the angel as Satan.[9][10][11] Latter-Day Saints believe that the use of “Abaddon” in Revelation 9 refers to the devil.[12]

In contrast, the Methodist publication The Interpreter’s Bible states: “Abaddon, however, is an angel not of Satan but of God, performing his work of destruction at God’s bidding”, citing the context at Revelation chapter 20, verses 1 through 3.[13][page needed]

Jehovah’s Witnesses as well cite Revelation 20:1-3 where the angel having “the key of the abyss” is actually shown to be a representative of God, one from heaven, and, rather than being “satanic”, is the one that binds Satan and hurls him into the abyss; concluding that “Abaddon” is another name for Jesus Christ after his resurrection. To give further understanding, the book “Insight from The Scriptures, Vol. 1 presents the following information:

At Revelation 9:11 this Hebrew word is transliterated into the English text. There we read concerning the symbolic plague of locusts that they have “a king, the angel of the abyss. In Hebrew his name is Abaddon, but in Greek he has the name Apollyon.” In Hebrew the word ʼavad·dohnʹ means “destruction” and may also refer to “the place of destruction.” It appears in the original Hebrew text a total of five times, and in four of the occurrences it is used to parallel “the burial place,” “Sheol,” and “death.” (Ps 88:11; Job 26:6; 28:22; Pr 15:11) The word ʼavad·dohnʹ in these texts evidently refers to the destructive processes that ensue with human death, and these scriptures indicate that decay or destruction takes place in Sheol, the common grave of mankind. At Job 31:12 ʼavad·dohnʹ designates the damaging effect of an adulterous course. Job declared: “That [adulterous course] is a fire that would eat clear to destruction [ʽadh-ʼavad·dohnʹ], and among all my produce it would take root.”—Compare Pr 6:26-28, 32; 7:26, 27. Abaddon, the angel of the abyss—who is he? At Revelation 9:11, however, the word “Abaddon” is used as the name of “the angel of the abyss.” The corresponding Greek name Apollyon means “Destroyer.” In the 19th century there were efforts made to show that this text prophetically applied to individuals such as Emperor Vespasian, Muhammad, and even Napoleon, and the angel was generally regarded as “satanic.” It should be noted, however, that at Revelation 20:1-3 the angel having “the key of the abyss” is shown to be God’s representative from heaven, and rather than being “satanic,” he binds and hurls Satan into the abyss. Commenting on Revelation 9:11, The Interpreter’s Bible says: “Abaddon, however, is an angel not of Satan but of God, performing his work of destruction at God’s bidding.”

In the Hebrew scriptures just considered, it is evident that ʼavad·dohnʹ is paralleled with Sheol and death. At Revelation 1:18 we find Christ Jesus stating: “I am living forever and ever, and I have the keys of death and of Hades.” His power with regard to the abyss is shown at Luke 8:31. That he has destroying power, including the power of destruction over Satan, is evident from Hebrews 2:14, which says that Jesus partook of blood and flesh in order that “through his death he might bring to nothing the one having the means to cause death, that is, the Devil.” At Revelation 19:11-16 he is clearly represented as God’s appointed Destroyer or Executioner.—See APOLLYON

In the 3rd century Acts of Thomas, Abaddon is the name of a demon, or the devil himself.

Abaddon is given particularly important roles in two sources, a homily entitled “The Enthronement of Abbaton” by pseudo-Timothy of Alexandria, and the Apocalypse of Bartholomew.[14][page needed] In the homily by Timothy, Abbaton was first named Muriel, and had been given the task by God of collecting the earth that would be used in the creation of Adam. Upon completion of this task, the angel was appointed as a guardian. Everyone, including the angels, demons, and corporeal entities feared him. Abbaton was promised that any who venerated him in life could be saved. Abaddon is also said to have a prominent role in the Last Judgement, as the one who will take the souls to the Valley of Josaphat.[14] He is described in the Apocalypse of Bartholomew as being present in the Tomb of Jesus at the moment of his resurrection.[15] 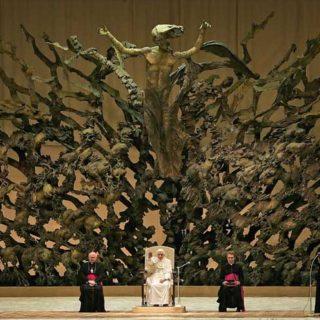 My Comment:  Here is the Pope sitting in front of the Satanic/Luciferian Demon of the Abyss surrounded by demons with the Satanic blood red and black robes as well as the Pope sitting on the throne in his Satanic majesties colors of gold and white.  Is this why he endorses homosexuality and a one world order?  people Wake Up!  Satanically produced video to accompany Satanic Religion.

Sad because I really liked the tune and Ke$ha’s talent.