Biggest Oil Thieves in Syria: Rothschilds and Murdoch (Both “Jews” aka Zionists)=RKA

The Syrian air defense shot down an Israeli warplane and hit another one after four aircraft had breached the war-torn country’s airspace and attacked government troops near Palmyra, the Syrian Army said on Friday. “Our anti-aircraft systems reacted and shot down one of the planes in the occupied territories. Another plane was also hit, the […]

David Rockefeller, Eugenics-Obsessed Globalist, Dies at 101     (He Wants Us All Dead ;  How Fitting That He Died 1st!) 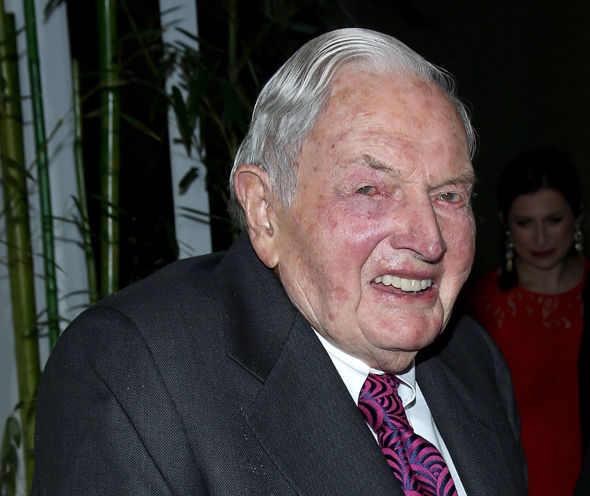 David Rockefeller, Sr., the last surviving member of the so-called “third generation” of the infamous Rockefeller dynasty, died in his sleep on Monday, aged 101.

If we lived in a world where headlines bore any connection to reality, the front pages of newspapers around the world would be informing us that one of history’s richest and most powerful eugenicists, an arch-globalist and committed enemy of humanity, had finally shuffled off this mortal coil.

Sadly, we do not live in such a world.

Instead we get this treacle-covered dreck served up to us by the New York Times: “David Rockefeller, Philanthropist and Head of Chase Manhattan, Dies at 101.”

Or this narcolepsy-inducing nonsense from our friends at PBS: “David Rockefeller, billionaire philanthropist and businessman, dies at 101.”

And the brightly-colored peacock? They omit even to mention that tawdry bit about business: “Billionaire Philanthropist David Rockefeller Dead at 101.”

On the other hand, I can sympathize with their conundrum. It would be impossible to condense such villainy down to a single headline. It would be like announcing the death of Darth Vader, except without the redemptive bit at the end. “Lord Vader, Scourge of the Galaxy, Dies on the Death Star; Ewok Funeral Pyre Dance at Sundown.”

Indeed, where does one begin when attempting to enumerate the evils embodied by this man?

Eugenicist? When the world’s richest eugenicists meet to plan how to reduce the world’s population, they are called to the table by David Rockefeller and they meet at The President’s House of Rockefeller University (where else)?

Chairman Mao? His “revolution” was admired by David Rockefeller.

“Some even believe we (the Rockefeller family) are part of a secret cabal working against the best interests of the United States, characterizing my family and me as ‘internationalists’ and of conspiring with others around the world to build a more integrated global political and economic structure—one world, if you will. If that’s the charge, I stand guilty, and I am proud of it.”
-David Rockefeller, Memoirs, page 405

I could go on. And on and on. And don’t worry, I will in this week’s edition of The Corbett Report podcast. But let’s be clear: There is no joy to be had in the death of another, even a Rockefeller. He left this world as he came into it: filthy rich, gluttonously greedy and mercilessly cruel. He has bequeathed that to the next generation of minions who will swoop in to fill his place in the power vacuum. The world has gained nothing by his death, surely not a respite from the powers-that-shouldn’t-be who will continue on exactly as before.

As always, the solace is to be found not in the death of a Rockefeller but in the mass of humanity that is awakening to his machinations. Let us neither mourn nor celebrate this day, but continue on with our quest as those aligned against us will no doubt continue on with theirs.

Filed in: Articles
Tagged with: rockefeller