My Comment:  We Must All Watch the Issues and All Stand Up and Be Activists!  This is NO Time to Be Complacent and think your job is done by voting.  Still believe Julian Assange was murdered by CIA/Clinton network Zionism.  There are so many ways to coverup his murder by using Hollywood Doubles (very commonly used), Clones, re-editing old tapes to put on Sean Hannity (Zionnist News Network) on Fox News (Zionnist News Network).  Call Congress about your concerns 202-224-3121 and don’t take NO for an answer.  YOU are the only Force to Stop the Corruption! 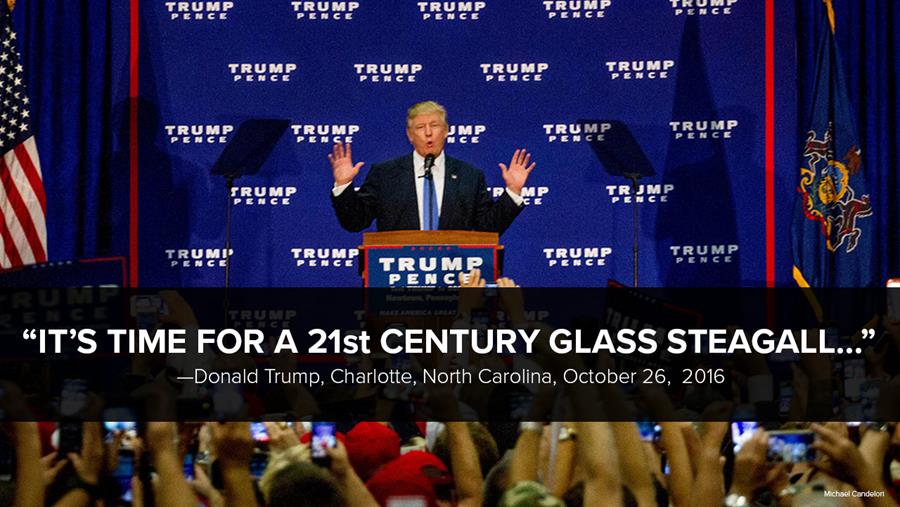 Patricia J – The following petition was originally drafted by a group entitled “Our Revolution in Northwest Ohio.” With their commitment to unify the entire nation, they have issued a call to all groups, e.g. the “Tea Party, Republicans, Democrats, Labor and Business,” to rally around the necessary first step of passing Glass-Steagall legislation. Their effort is consistent with the aims of LaRouchePAC, and we are circulating this as part of a national mobilization for the immediate passage of Glass-Steagall legislation by the House and Senate, to be signed into law by President Trump.

Open Letter to President Donald Trump and to all members of Congress:

We the undersigned strongly feel the need for protecting our economy from another unnecessary market crash and recession like the one experienced in December of 2007. As you take office, the conditions for a collapse are too similar to those of 2007: rising asset values together with a lack of separation between FDIC insured banking and risk-investment brokering.

We applaud President Trump’s campaign statement in Charlotte, North Carolina, October 26, 2016, endorsing a call for “A 21st Century version of Glass-Steagall,” and reintroducing a modern day Glass-Steagall Act. We trust that you understand that stabilizing the business climate and securing the assets as separate from Wall Street speculation is a key to prosperity during your administration.

To set the tone of discourse in Congress 2017, we ask that President Trump restate his support for a Glass-Steagall Act during the State of the Union address.

Be assured in doing so, you will find common ground with both the Republicans and the Democrats since both party platforms have the support of banking legislation that separates insured accounts from Wall Street speculation in their respective platforms.

Thank you for responding to the call from citizens, businesspersons, bankers and legislators as we move forward.

WE URGE THAT THE GLASS-STEAGALL LEGISLATION BE PASSED BY BOTH THE HOUSE AND SENATE OF THE U.S. CONGRESS, AND SIGNED INTO LAW BY INCOMING PRESIDENT DONALD TRUMP. WE ALSO ASK THAT THE ENTIRE FOUR LAWS OF ECONOMIC DEVELOPMENT ALSO BE IMPLEMENTED DURING THE FIRST 100 DAYS.

*Please leave your city, state and zipcode if you want us to deliver the signatures to your Representatives.