Op-Ed: China Openly Contemplating War Against The US

It felt like only moments ago that the United States was on the brink of war with Russia, but now it looks like China is set to take the number one spot on America’s international rival list.

An official website of the Chinese People’s Liberation Army carried an Inauguration Day post stating that Trump’s Presidency has made the prospect of military conflict between China and the US “a reality.”

This news has Western publications in a flurry of reporting on the story, which was originally carried by the South China Post last Friday.

The CNBC coverage in particular is somewhat confusing—mentions of military confrontation between the two superpowers are interspersed with references to trade war.

The founder of the massive Chinese online trading space Alibaba thinks the conflict won’t be about bombs, guns and soldiers, but economic warfare.

One thing is for sure: The shifting sands of international relations are slipping under the feet of world leaders at an alarming pace.

On the eve of the US Presidential election, the mood in Moscow was sombre. With NATO massing forces on Russian’s Western borders and a globally anticipated Clinton victory seemingly imminent, World War III felt simply inevitable. The surprise defeat of the former secretary of state resulted in that dark future being deftly circumvented and the cloud of impending war lifting. For the first time in a long while, the prospect of a major global escalation felt avoidable.

As recently as today, we have instead seen the US-Russia relationship completely transformed. Promises of mutually-beneficial trade and military cooperation with the ultimate aim of the destruction of ISIS in the Middle East, have replaced the open hostility and aggression of the Obama administration.

But it seems the relief may be short lived as the rhetoric ramps up from both China and the US, particularly with regard to new Chinese military installations in the South China Sea. While technically in international waters, China very much feels that the territory is too close to home not to dominate. Their recent seizure of a US underwater drone led to a very public international incident that seems a mere minor blip in light of the recent declarations of readiness for war from China’s army.

Other countries are already staking their position: the Philippines has demanded that the US not stockpile weapons in the country, to avoid becoming involved in a political tug-of-war between the two opposing factions.

Australia was warned as far back as 2014 that if they didn’t scale back their extremely close military relationship with the United States that they could end up bearing the brunt of any confrontation in the South Pacific.

Unsurprisingly, the rhetoric on social media has been varied. 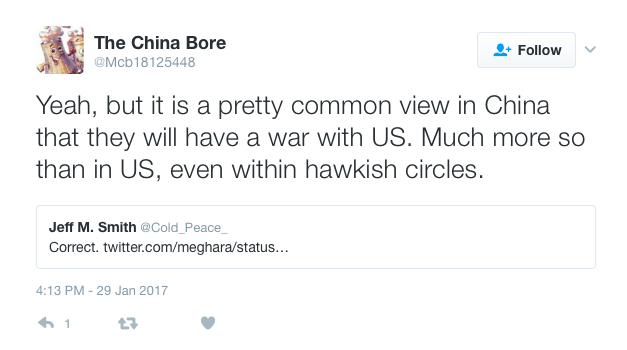 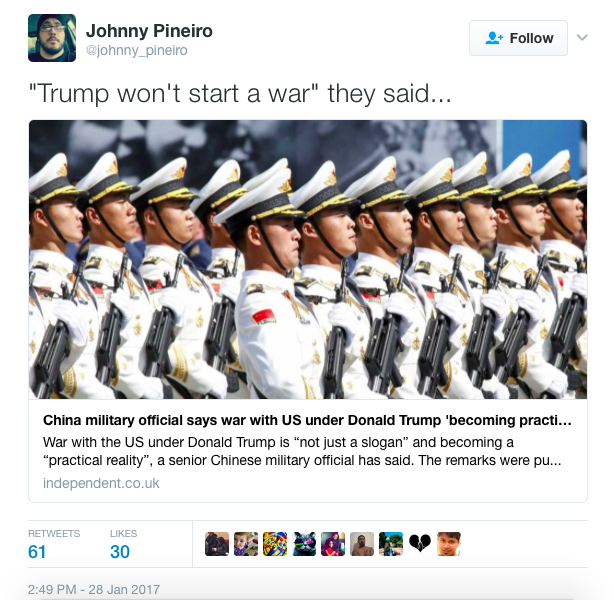 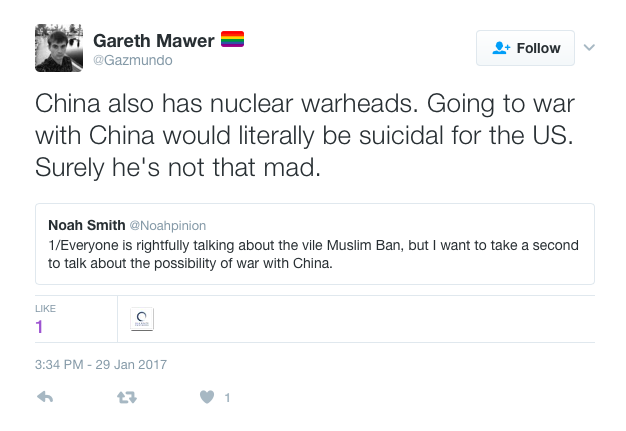 If we have learned anything at all from the preceding years and decades, it is that superpowers like to fight each other on other people’s turf rather than their own. Therefore battle is more likely to take the form of proxy wars, be they covert or overt.

We also should have learned by now that tough talk by the leaders of countries, no matter how ominous it sounds, is usually just the pluming of peacock feathers that has the byproduct of greasing war industry profits and weapon sales rather than necessarily leading to direct military engagements.

So, if anything, we are more likely to see a series of economic sanctions and counter sanctions, or large currency shifts and warfare waged through the sharemarket, than in actual shots being fired.

That said, the exception is when the escapades of the over-reaching mighty skirmish too close to the borders of the homeland of an opposing power. Such as we saw in the Ukraine. Those scenarios usually trigger the unexpected, as with Russia’s immediate annexation of the Crimean peninsula.

Land (and in this case, waters) of strategic geographic importance to superpowers, is the most vehemently defended.

So it is entirely possible that if the US keeps pushing the envelope regarding the South China Sea, that they might bite off more than they can chew.

The post Op-Ed: China Openly Contemplating War Against The US appeared first on We Are Change.