LaRouche: Obama’s Words are a Threat to Kill 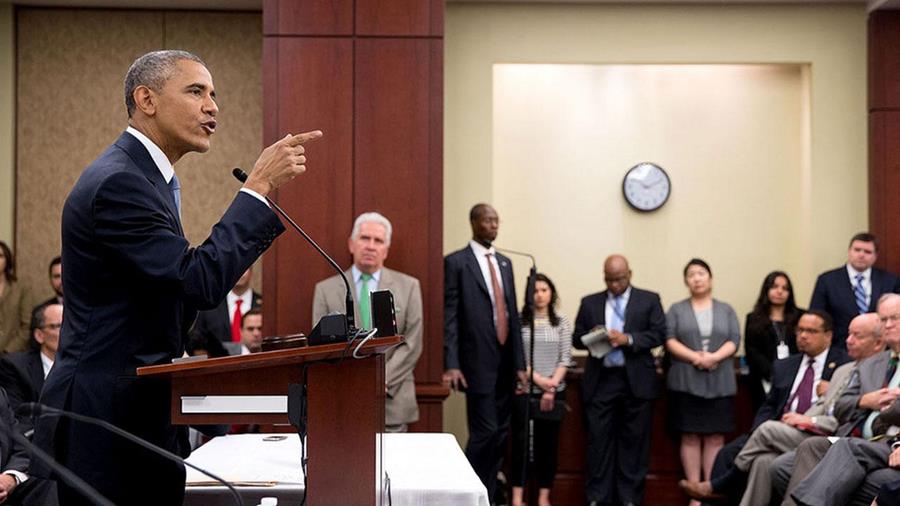 Friday, in a nationally broadcast interview on NPR Morning Edition, supposedly in response to allegations of Russian hacking of the DNC, President Barack Obama stated menacingly,

“I think there is no doubt that, when any foreign government tries to impact the integrity of our elections, that we need to take action, and we will, at a time and place of our choosing. Some of it may be explicit and publicized; some of it may not be. But Mr. Putin is well aware of my feelings about this, because I spoke to him directly about it.”

LaRouche said, “These words are a threat to murder people of importance. This is what his [step] father taught him.”  LaRouche called on citizens to “watch this guy, that he doesn’t kill.” He is publicly threatening the world. “The nations of the planet are now threatened by Obama’s plan for mass killing of people…”

Then at his White House press conference this afternoon, Obama repeated his threat against “Russian hacking.” He said that he told Russia “to stop it, and indicated there will be consequences when they do it… Our goal continues to be to send a clear message to Russia.”

The charge of Russian interference in elections itself smells to high heaven, given that month after month, no evidence has been produced that would demonstrate Russia’s guilt, but only incessantly-repeated assertions. Today, Russian presidential spokesman, Dmitry Peskov said that the United States should stop groundlessly accusing Russia of intervention.

“They should either stop talking about that, or produce some proof at last.”

Putin did NOT elect Donald Trump

Despite the media deluge of lies dating back to July, polling shows that the American people do not believe Obama’s claims. The danger comes from Obama’s predilection to kill and also from his desperation to avoid prosecution for his crimes once he leaves office and the full classified record is before the new Administration. There are his Tuesday drone kill meetings which have killed thousands of innocents and produced terrorists world-wide. There are his endless genocidal wars in the Middle East and assassinations of heads of state. In the United States thousands of citizens have suffered and died from the Obama economic disaster, which he calls a successful recovery. Heroin overdoses and death rates, especially in the nation’s most rural areas, are soaring.

He is also being egged on by the hysterical liberal elites of the world whose policies have been completely rejected in successive elections in Britain, the United States, and Italy. LaRouche noted that “internationally right now, we have people leading a world program for development and peace the Eurasian New Silk Road, with Pres. Xi Jinping, along with Pres Putin and others, but “Obama will not just let things get by peacefully.”

Please circulate this statement as widely as you can; and please donate. Organizing effectively to stop this, particularly in the Christmas season, requires a focused campaign and funding. Thank you for your help.