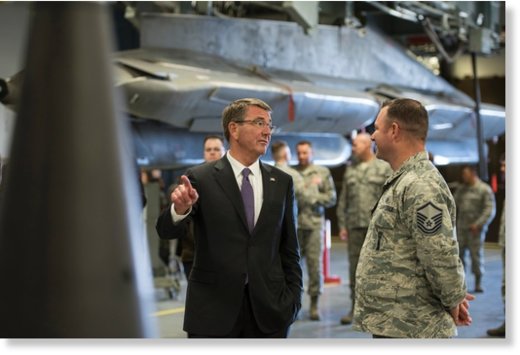 US Defense Secretary Ashton Carter delivered a speech to “missileers” at the Air Force Global Strike Command base in Minot, North Dakota Monday, defending the massive modernization of the US nuclear arsenal and issuing bellicose threats against Russia.

Carter’s trip to Minot was the first he has taken to a nuclear missile base since becoming secretary of defense in February 2015. It coincided with the steady escalation of conflicts pitting the US against nuclear-armed Russia and China that threaten to ignite a new world war.

The thrust of Carter’s speech was a defense of the Pentagon’s proposed $348 billion plan to rebuild Washington’s so-called nuclear triad of strategic bombers, missiles and submarines. Estimates are that over a 30-year period, this nuclear buildup will siphon fully $1 trillion out of the American economy.

Delivered to the officers and enlisted personnel tasked with launching Minuteman III intercontinental ballistic missiles, each carrying warheads with 60 times the destructive capacity of the bombs dropped on Hiroshima and Nagasaki in 1945, the speech at times seemed to echo the title of the satiric 1964 film Dr. Strangelove or: How I Learned to Stop Worrying and Love the Bomb.

This massive US death machine, Carter insisted, provided “the bedrock of security” that has “enabled millions and millions to get up in the morning to go to school, to go to work, to live their lives, to dream their dreams and to give their children a better future.”

He went on to predict that “given what we see in today’s security environment, it’s also likely that our children and their children will probably have to live in a world where nuclear weapons exist.” In reality, assuming the continuation of the present “security environment” and the continued existence of nuclear weapons, there is good reason to fear that the world will be incinerated in the lifetimes of “our children and their children.”

While using the anodyne Pentagon jargon of “our nuclear enterprise” to refer to the US nuclear war arsenal, Carter’s speech contained passages hinting at the undeniable fact that the threat of a nuclear conflagration is now greater than at any time since the height of the Cold War.

He warned that while “in the more than seven decades since 1945, nuclear weapons have not again been used in war, that’s not something we can ever take for granted.”

He added: “In today’s security environment, one that’s dramatically different from the last generation, and certainly the generation before that, we face a nuclear landscape that continues to pose challenges…that continues to evolve, in some ways less predictably than during the Cold War, even though many around the world and even some in the United States are stuck in the Cold War in their thinking.”

What has changed in the wake of the Cold War and the Stalinist bureaucracy’s dissolution of the Soviet Union in 1991 is the eruption of American militarism, based on the conviction of the US ruling establishment that, with the demise of the USSR, it could freely employ its military might in a bid to assert world hegemony and reverse the global economic decline of American capitalism.

The wars fought over the last quarter century, particularly in the Middle East, have produced a series of debacles and a world historic catastrophe for the peoples of the region. At the same time, they have metastasized into broader conflicts pitting the US ever more directly against Russia and China.

In a press conference after his speech, Carter gave vent to the mounting frustration in Washington over the failure of its five-year-old proxy war for regime change in Syria. This has taken the form of ever more hysterical denunciations of Russia for “war crimes”—this from a government responsible for well over a million deaths in the region.

“What’s going on now in Syria is tragic, disgraceful, preventable, and—as I think everyone around the world has been emphasizing over the weekend—Russia and the Syrian regime bear responsibility for the violence, particularly against civilians,” Carter told the media.

The real concern in Washington is not the loss of civilian lives, but rather the prospect that the Syrian government, backed by Russian airpower, is on the verge of overrunning east Aleppo, one of the last bastions of the Al Qaeda-affiliated militias that constitute the main fighting force in the US-orchestrated war for regime change.

Attacking Russia in his speech, Carter said: “Moscow’s recent saber rattling and building of new nuclear weapons systems raises serious questions about its leaders’ commitment to strategic stability, their regard for long-established abhorrence of using nuclear weapons and whether they respect the profound caution that Cold War-era leaders showed with respect to brandishing nuclear weapons.”

The Obama administration, which recently signaled its decision to abandon even the Democratic president’s pretense of renouncing a nuclear first strike as official US policy, has attempted to portray Russia as responsible for igniting a new nuclear arms race. Given that Russia’s military budget is little more than one-tenth that of the US, and less than that of Washington’s closest Arab ally, Saudi Arabia, this amounts to an absurd pretext.

The nuclear saber rattling is being carried out by the US government, and Carter’s trip to Minot was part of it.

The defense secretary described the nuclear bombers and missiles as a force that served to “enable” US troops “to accomplish their conventional missions around the world.”

“As you know, they’re standing with our NATO allies and standing up to Russia’s aggression in Europe,” he said, referring as well to US operations in “the vital Asia-Pacific region,” “deterring North Korea’s provocations” and “countering Iran’s malign activities in the Middle East.”

Referring to the relentless US-NATO military buildup against Russia, Carter declared: “Across the Atlantic, we’re refreshing NATO’s nuclear playbook to better integrate conventional and nuclear deterrence to ensure we plan and train like we’d fight and to deter Russia from thinking it can benefit from nuclear use in a conflict with NATO, from trying to escalate to de-escalate, as some there call it.”

The US and its NATO allies are deploying thousands of troops on Russia’s western border and have created a 40,000-strong rapid reaction force in preparation for war. The stated commitment to “integrate conventional and nuclear” forces in this effort has placed the threat of nuclear war on a hair trigger.

Last week, the Russian news agency Tass quoted the commander of Russia’s Strategic Missile Force, Sergey Karakayev, as reporting that the latest Yars mobile ballistic missile systems are being deployed to the Tver region, the country’s westernmost ICBM command. Moscow is carrying out the deployment in response to Washington’s positioning of an antimissile defense system in Romania and plans to set up similar batteries in Poland. While the US pretext is that the systems are directed against Iran, which has no nuclear weapons, Moscow sees the deployments as an attempt to make a first strike against Russia more feasible. It also charges that the ABM systems can easily be converted to fire short- and medium-range offensive nuclear missiles.

In his speech Monday, Carter also made a brief reference to a Pentagon effort to boost morale among the military personnel assigned to launch a nuclear war, saying it was “bearing fruit.” In 2013 and 2014, over 100 officers and enlisted personnel at nuclear bases were implicated in a scandal involving drug abuse, cheating on proficiency tests and gross security violations. The nuclear war command also saw a series of top officers removed from their posts.

The claim of improved morale was called into question, however, with the court martial in June of one member of the security forces at the F.E. Warren nuclear missile base in Wyoming on charges of using and distributing the hallucinogenic drug LSD. Fourteen other airmen have been suspended for suspected drug use there.