HILLARY CLINTON IS AN ILLUMINATI CRIMINAL!

The shocking statement made by Wikileaks founder Julian Assange was made during an interview with Democracy Now. “Hillary’s hacked emails include info on Hillary arming jihadist.” 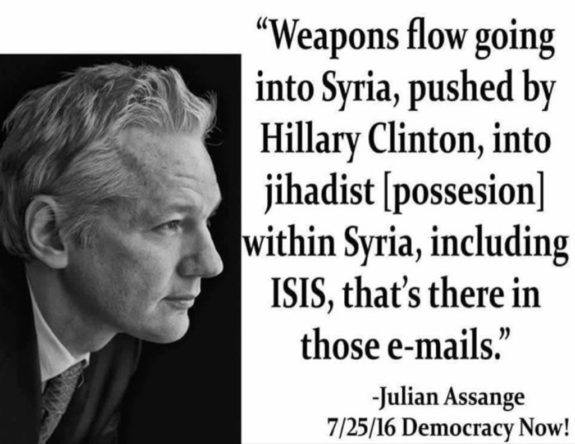 Assange has previously promised there is way more to come on Hillary Clinton, saying a few days ago during the DNC convention that “We have more material related to the Hillary Clinton campaign”

“So, those Hillary Clinton emails, they connect together with the cables that we have published of Hillary Clinton, creating a rich picture of how Hillary Clinton performs in office, but, more broadly, how the U.S. Department of State operates. So, for example, the disastrous, absolutely disastrous intervention in Libya, the destruction of the Gaddafi government, which led to the occupation of ISIS of large segments of that country, weapons flows going over to Syria, being pushed by Hillary Clinton, into jihadists within Syria, including ISIS, that’s there in those emails. There’s more than 1,700 emails in Hillary Clinton’s collection, that we have released, just about Libya alone.”
~Julian Assange, Wikileaks said.

Hillary Clinton as Secretary of State helped arm jihadist in Syria and Libya, she helped over throw Assad and even laughed about the death of Gaddafi.

She armed “moderate rebels” the Free Syrian Army which have connections to Al-Qaeda, Al-Nusra through their joint commanders something that Storm Clouds Gathering exposed.
Showing a commander of the FSA’s northern front Colonel Abdel Basset Al-tawil ties to Al-Nusra.

Assange said this right here is the reason why he archived all of her emails like “the library of Alexandria there is proof within those emails that she knowingly armed jihadist including isis.”

Rand Paul has previously questioned Hillary Clinton about the CIA gun running program back in January 2013 during her testimony on the Benghazi terrorist attack. Which many alternative news outlets and my own personal sources speculate that Ambassador Stevens may have been involved in this indirectly or directly Hillary’s State Department was behind this decision to send weapons into Syria and Libya despite being banned from doing so by the Obama administration.

An NSA whistle-blower William Binney has also made the extraordinary claim that the NSA has all of Hillary’s emails in a radio interview broadcast on Sunday with Breitbart Aaron Klein’s Investigative Radio. Referencing FBI Director Robert S. Mueller speech in which Meuller spoke of the FBI’s capability to access several secretive databases “to track down known and suspected terrorists.”

Additionally he speculated that the DNC hack might not have been done by Russia but a disgruntled employee instead suggesting that someone might not like that she endangered our nations highest secrets including Gamma level material. We will keep you updated with all the new developments regarding Hillary’s hacked emails stay tuned to We Are Change.

The post Julian Assange “Hacked Emails Include Info On Hillary Arming Jihadists, Including ISIS, in Syria” appeared first on We Are Change.