Why Not Nominate Ron Paul To The Supreme Court? 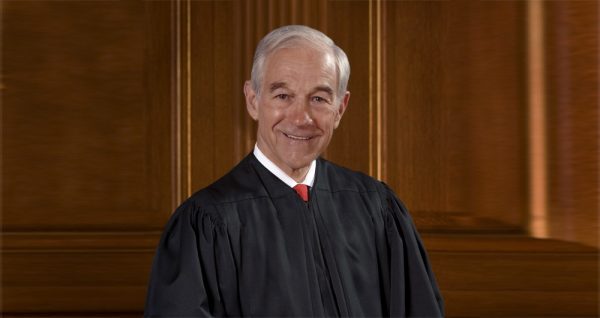 There’s ten months to go of Barack Obama’s second term but Republicans don’t want to let him nominate a liberal justice that will forever upset the balance of the court. They’ve pledged to block all of his nominees until after the November election. Although, this puts the Supreme Court in a quandary. There are numerous cases currently being heard that will need decisions this year and there needs to be a tie breaker on the nine seat court. Republicans and Democrats will have to compromise. The best way for that to happen is to nominate Ron Paul to the Supreme Court.

There are three factors that are preventing a new justice from being appointed to the Supreme Court. Barack Obama wants to nominate a liberal justice, the Senate wants to confirm a conservative one, and many do not want to permanently change the balance of the court in a President’s final year. Nominating Ron Paul to the Supreme Court would solve all three of these problems.

Ron Paul has an encyclopedic knowledge of the Constitution, the Bill of Rights, and the role of government. That qualifies him more than any law degree. He’s also a libertarian so he would be a fair and impartial tie breaker. On occasions he might side with the liberal justices and in other instances he might side with conservatives. Democrats would get a bit of what they want and so would Republicans. The balance of the court would not shift reliably left or right with Ron Paul as a justice.

Furthermore, given that Ron Paul is already eighty one years old he would not be a justice for long. In fact, Ron Paul could retire from the court right after the inauguration of the next President. That would give the next President the chance to nominate a permanent justice as the people wish.

As with all compromises, nominating Ron Paul to the Supreme Court would require give and take from both Barack Obama and Mitch McConnell. However, both sides would come out on top with decisions in their favor and an acceptable temporary solution.