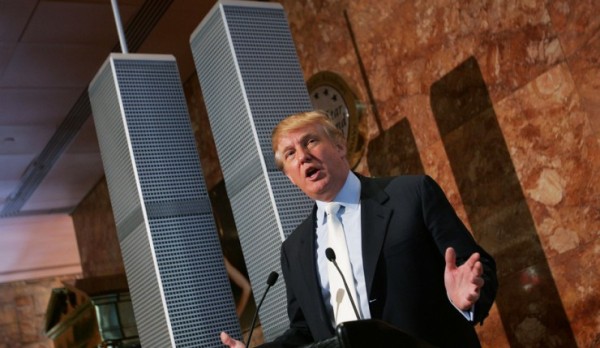 Over the last year Republican Presidential Candidate Donald Trump has consistently made headlines with his outrageous (and sometimes outright fascist) statements. Most of Trump’s statements seem to promote division and distraction; however, recently Trump has decided to venture into the controversial territory of questioning the official story of the terror attacks of September 11, 2001.

Trump briefly flirted with 9/11 Truth in the past with his comments claiming he witnessed Muslims celebrating the attack but I personally saw that situation as more of a smokescreen. As many readers may know, it was not Muslims who were actually seen dancing and celebrating on camera but a group of dancing Israelis. Trump had many opportunities to clarify his comments and to call out the Israeli agents but instead chose to keep fanning the flames of Islamophobia.

“It wasn’t the Iraqis that knocked down the World Trade Center, we went after Iraq, we decimated the country. Iran’s taking over, okay. But it wasn’t the Iraqis, you will find out who really knocked down the World Trade Center, ‘cause they have papers in there that are very secret, you may find it’s the Saudis, okay? But you will find out,” said Trump.

The “secret pages” Trump is referencing is more than likely the classified 28-pages of the Joint Inquiry into Intelligence Community Activities Before and After the Terrorist Attacks of September 11, 2001 (not the 9/11 Commission Report). Although the final report amounts to over 800 pages, the 28 pages were classified by former President George W. Bush shortly after the report was released in 2002. The 28 pages make up the bulk of a section titled “Part 4: Finding, Discussion and Narrative Regarding Certain Sensitive National Security Matters.”

Officials who have seen the documents have stated that the information relates to financing of the suspected terrorists, and points a finger at members of the government of Saudi Arabia. Upon seeing the pages himself, Kentucky Republican Congressman Thomas Massie said there will be “anger, frustration, and embarrassment when these 28 pages finally come out.”

Currently there is pressure on the House and Senate to declassify the 28 pages, and there are resolutions urging President Obama to release these documents to the public.

In a recent phone conversation with Truth In Media’s Joshua Cook, former Democratic Senator Bob Graham, who headed the Congressional Joint Inquiry into the deadly 9/11 attack back in 2002, said he was “very pleased that Trump made the 28 pages a national issue.” Graham reiterated that the information in the 28 pages shows who financed the 9/11 hijackers, and it points to the Saudi government. Last year, Graham told Cook that “the U.S. government doesn’t want the public to know that the Saudis financed the 9/11 attacks because we provide the Saudis with billions in military aid.”

Despite Trump’s references to secret papers most of the corporate media has decided to focus on his antics rather than the content of his words. So when the Republican Presidential Debate came to Houston, Texas I decided to see if I could get an answer out of Trump. As you can see in the video below, Trump is surrounded by reporters asking inconsequential questions. I had a brief moment to bring up 9/11, and the 28 pages. Trump definitely heard me and briefly made eye contact but chose not to answer.
https://www.youtube.com/watch?v=6fA_Q82HfpI

So what do you think? Does Trump know that the official story of 9/11 is a complete lie? Is he ready to call out not only the Saudis but all foreign nations and domestic agents who may have had a hand in the attack? I highly doubt it. More than likely Trump is being controversial for the sake of headlines and maintaining his “outsider” status.

Derrick Broze is an investigative journalist and liberty activist. He is the Lead Investigative Reporter for ActivistPost.com and the founder of the TheConsciousResistance.com. Follow him on Twitter.

The post Donald Trump Questioned About 9/11, Secret 28 Pages appeared first on We Are Change.