The $650 trillion derivatives market is a nightmare scenario waiting to happen.

First problem: the size. It’s 36 times the size of the U.S. GDP and over eight times larger than the world GDP, that is, the entire global output of the entire world in a year.

Second problem: the interconnectedness. Every derivative contract involves two parties. In a crisis, one of these counterparties may be unable and/or unwilling to meet his obligations, leaving a volume of broken contracts that will overwhelm these institutions and render them instantly insolvent.

That’s why it’s crucial we understand the ramifications of these instruments – because while the derivatives monster is ugly, there are things individual investors can do now.

Plus, one of the worst offenders could be your own bank…

The Office of the Comptroller of the Currency, which tracks the exposure of U.S. banks to derivatives, released this terrifying chart for Q3 2015: 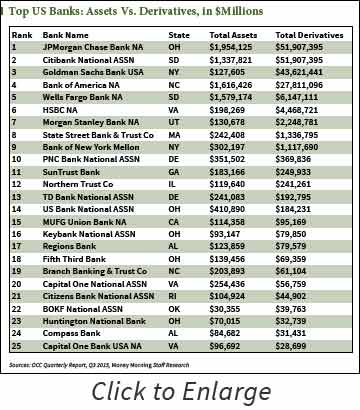 That’s not even counting the world’s largest known purveyor of derivatives, Deutsche Bank AG USA (NYSE: DB), which in late 2015 held $60 trillion of derivatives contracts on its books. I’ve written before that Deutsche Bank may well pose the single biggest systemic risk of any financial institution in the world because it suffers from other problems, such as a huge amount of bad loans and poor management controls.

This level of derivatives in an increasingly unstable and volatile financial system isn’t sustainable.

Derivatives are opaque, difficult‐to‐price instruments from which Wall Street earns large profits. Wall Street is not a public utility – it is a profit-seeking engine whose primary purpose is to generate money for itself. The more complex and opaque the instrument, the easier it is for Wall Street to fool investors (even supposedly smart money investors like hedge funds and large institutions) and mark up these instruments to earn outsized profits from selling and trading them.

We have created a complex monster that we don’t understand…

…and we can’t control it for much longer.

Credit derivatives disassemble bonds, loans, and mortgages into their constituent parts and then reassemble them into new configurations that can be sold to different investors (or speculators) with different risk appetites. Derivatives are the financial version of splitting the atom or dissecting the human genome.

The problem with deconstructing a debt instrument into its constituent parts is that it abstracts the new instrument – the derivative – from the underlying or reference obligation, separates the lender from the borrower, and vests economic power over the ultimate borrower in the hands of a party that has little or no knowledge about or interest in the actual business or economic fate of this borrower.

The indirect nature of a derivative obligation – the fact that its value is determined by reference to something outside of itself – renders it unusually complex and inherently unstable because it is subject to variables beyond the control of the parties to the contract.

Derivatives are the ultimate manifestation of disembodied financial relationships driven by forces that are difficult to identify or control.

At times during the 2008 financial crisis, it seemed as though the fiscal and monetary authorities were not going to be able to stop the markets from collapsing. The reason for this feeling of helplessness was not simply the volume of selling that was raining down on the markets, but the fact that it was difficult to identify the source of selling and the reasons for selling. This was particularly true with respect to the sale of credit instruments such as mortgages, bonds, and bank loans, the prices of which were driven to levels that made no rational sense unless one truly believed that the end of the world was at hand.

Perhaps the most frightening thing about derivatives is that they have absolutely no relationship to the physical reality of financial obligations. The parallel universe of credit derivatives dwarfs the cash obligations with respect to which they are written.

In the most widespread type of credit derivative – credit default swaps – the market grew to more than $60 trillion in size on the eve of the 2008 financial crisis, far greater than the volume of cash obligations it was insuring. (You can see the same chilling phenomenon in the bank chart earlier in this article.) The sheer size of this market came to exercise an enormous and often perverse influence on the world of cash credit obligations. Like Frankenstein, the creature who turned on and ultimately destroyed all that mattered most to his master, credit default swaps created horrific unintended consequences for borrowers and lenders.

The Perverse, Inherent Evil of Credit Derivatives (and a Profitable, Proactive Solution)

Credit derivatives, at their most basic, are designed to root for businesses to fail.

Credit default swaps create a structure in which lenders are so alienated from the flesh‐and‐blood labor of the businesses that are responsible for repaying them that the traditional relationship between borrower and lender is not only sundered but in certain circumstances rendered adversarial. One of the dirty little secrets about credit default swaps is that they create in the buyer of protection (the insured) a strong economic incentive to see the borrower fail; in

So‐called “basis packages,” in which investors own both a bond and a credit default swap related to that bond, are often structured to deliver a higher return if the borrower files for bankruptcy, thereby forcing a payout on the credit default swap contract at the time of the bankruptcy filing (as opposed to the end of the bankruptcy reorganization process, which can take months or years).Rather than leading lenders to participate in a consensual out‐of‐court restructuring that generally imposes much lower costs on the borrower, this regime pushes borrowers into highly expensive bankruptcy proceedings that create little economic value for anybody but bankruptcy attorneys and restructuring advisors. In the hands of speculators who have no interest in the ultimate survival of the business (if they even know what the business is and what it does), businesses are reduced to empty carcasses whose bones are more likely to be sold in liquidation than emerge as viable going concerns with new, deleveraged balance sheets.

many cases, a default produces the highest possible payout and highest rate of return for the buyer of credit insurance.

Moreover, because the volume of credit default swaps can dwarf the amount of a company’s outstanding debt, the derivatives market, rather than direct lenders, can determine the fate of a debtor.

This means that the parties calling the shots are not those who have an interest in the underlying business, the employees, or the communities affected by whether a company can ultimately restructure its debts. Instead, power is vested in the hands of credit default swap holders who do not own the underlying debt instruments but have merely placed speculative bets, usually with very little money down, on the future of flesh‐and‐blood businesses.

In the period leading up to the 2008 crisis, this economically unsound phenomenon was exacerbated by the fact that many debts were incurred in private equity transactions where much of the value was skimmed off into the hands of private equity sponsors through management, monitoring, and transaction fees, rather than into the hands of the limited partners who represent endowments and foundations and other tax‐exempt organizations. The combination of these factors led to a voiding of the value of leveraged companies into the hands of financial speculators. The government, through the bankruptcy process or, in the event of a systemically important company, through a bailout, was left to clean up the mess.

From a public policy standpoint, this raises very serious questions about the proper role of debt and derivatives markets in the economy.