U.S. President Barack Obama. © Jonathan Ernst / Reuters
4.2K13
A petition accusing Barack Obama of war crimes and demanding he be prosecuted has been published on the White House website. It has already gained about 4,000 signatures.

“We demand conviction of a war criminal Barack Obama and trial in the International Criminal Court in [The] Hague. He is guilty of crimes not only against the USA citizens, but against the whole world,” the petition states. 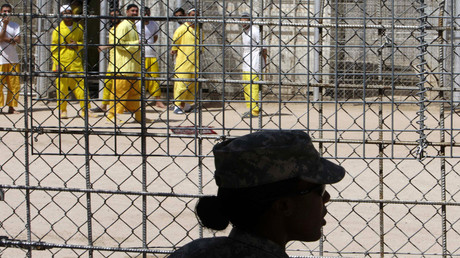 US prisoners’ torture photos – ‘Meant to downplay what really happened’

The authors also note that “one of the most dreadful prisons in history – Guantanamo – continues to function.”

The US added to the de-stabilization of the situation in the Middle East, too, the petition’s authors state.

“Libya was destroyed as a result of Obama’s aggression. In Syria, Obama’s agents train, fund and organize terrorist groups, deceitfully naming them ‘moderate opposition,’ who, among other things, bear a relation to Al-Qaeda, implicated in crimes against the American people.”

Last but not least, the petition accuses the US government of constant illegal surveillance.

If the petition – published on Monday – gets 100,000 votes by March 9, the White House administration will have to respond to it.