(February 10, 2016) – A new national poll conducted by The Washington Post and Kaiser Family Foundation finds that both men and women identify reducing sexual violence as their top priority in order to improve the lives of women.

Those polled were given a choice of 11 possible priorities, from equal pay to paid family leave to childcare. “Reducing domestic violence and sexual assault” ranked as the public’s highest priority, with 84% of women and 83% of men citing this as the single biggest issue we need to address in order to improve the lives of women in the United States. The second-highest ranked issue, equal pay, was listed as a top priority for 75% of survey takers, followed by “access to quality, affordable childcare” and sexual harassment.

“For more than 21 years, RAINN has led national efforts to combat sexual violence,” says Scott Berkowitz, RAINN’s president and founder. “Every day we work with Congress, survivors, and colleges, among many others, to accomplish this. I’m very encouraged that the public overwhelmingly supports, and prioritizes, our cause. With their help, I am confident this is a fight we can win.”

RAINN (Rape, Abuse & Incest National Network) is the nation’s largest anti-sexual violence organization and was named one of “America’s 100 Best Charities” by Worth magazine. RAINN created and operates the National Sexual Assault Hotline (800.656.HOPE and online.rainn.org) in partnership with more than 1,000 local sexual assault service providers and operates the DoD Safe Helpline for the Department of Defense. The hotlines have helped more than two million people since 1994. RAINN also carries out programs to prevent sexual violence, help victims and ensure that rapists are brought to justice.

Please consider getting involved by donating today, and learning about RAINN’s work to change laws and policies. 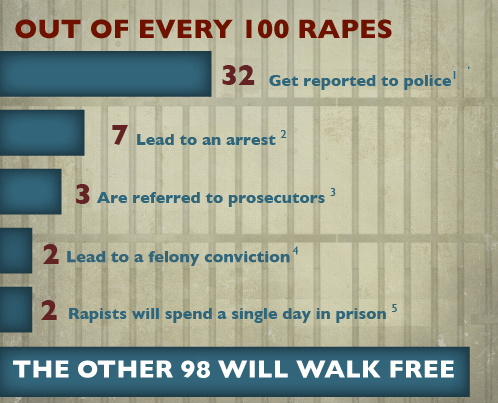 Percentage of the 7,974 rape kits Illinois police stored between 1995 and 2009 that were confirmed to have been tested: …

My Comment:  The US Government doesn’t want rape kits tested;  more money is needed for wars (#1 Priority) benefiting the Rothschild Khazarian Mafia-this is what taxpayer money is being used for.