A Refugee Crisis Made In America

A Refugee Crisis Made In America

Submitted by Philip Giraldi via TheAmericanConservative.com,

On April 29th, 2008 I had a Saul on the Road to Damascus moment. I had flipped open the Washington Post and there, on the front page, was a color photo of a two year old Iraqi boy named Ali Hussein being pulled from the rubble of a house that had been destroyed by American missiles. The little boy was wearing shorts and a t-shirt and had on his feet flip-flops. His head was hanging back at an angle that told the viewer immediately that he was dead.

Four days later on May 3rd a letter by a Dunn Loring Virginia woman named Valerie Murphy was printed by the Post. Murphy complained that the Iraqi child victim photo should not have been run in the paper because it would “stir up opposition to the war and feed anti-US sentiment.” I suppose the newspaper thought it was being impartial in printing the woman’s letter, though I couldn’t help but remember that the neocon-dominated Post had generally been unwilling to cover anything antiwar, even ignoring a gathering of 300,000 protesters in Washington in 2005. Rereading the woman’s complaint and also a comment on a website suggesting that the photo of the dead little boy had been staged, I thought to myself, “What kind of monsters have we become.” And in truth we had become monsters. Bipartisan monsters wrapped in the American flag. Bill Clinton’s Secretary of State Madeleine Albright once said that killing 500,000 Iraqi children through sanctions was “worth it.” She is now a respected elder statesman close to the Hillary Clinton campaign.

I had another epiphany last week when I saw the photo of the little Syrian boy Aylan Kurdi washed up on a Turkish beach like a bit of flotsam. He was wearing a red t-shirt and black sneakers. I thought to myself that many Americans will shake their heads when looking at the photo before moving on, more concerned about Stephen Colbert’s debut on the Late Show and the start of the NFL season.

The little boy is one of hundreds of thousands of refugees trying to get to Europe. The world media is following the crisis by focusing primarily on the inability of unprepared local governments to deal with the numbers of migrants, asking why someone somewhere can’t just “do something.” This means that somehow, as a result, the vast human tragedy has been reduced to a statistic and, inevitably, a political football.

Overwhelmed by thousands of would-be travelers, Hungary suspended train service heading towards Western Europe while countries like Serbia and Macedonia deployed their military and police along their borders in a failed attempt to completely block refugees. Italy and Greece have been overwhelmed by migrants arriving by sea. Germany, to its credit, is intending to process up to 800,000 refugee and asylum applications, mostly from Syria, while Austria and Sweden have also indicated their willingness to accept many more. Immediate neighbors of the zone of conflict, notably Turkey, Lebanon and Jordan are hosting more than three million of those who are displaced, but the wealthy Arab Gulf countries and Saudi Arabia have done little or nothing to help.

Demands for a European unified strategy to deal with the problem are growing, to include sealing borders and declaring the seas off of preferred departure points in North Africa and Asia to be military zones where undocumented ships and travelers will be intercepted and turned back. One also has to suspect that the refugee crisis might be exploited by some European politicians to justify NATO “humanitarian” intervention of some sort in Syria, a move that would have to be supported by Washington. But while the bickering and maneuvering goes on, the death toll mounts. The recent discovery of 71 dead would-be migrants who suffocated in the back of a locked truck found in Austria, to include five children and a toddler, horrified the world. And that was before the dead three year old on the Turkish beach.

Many of the would-be migrants are young men looking for work in Europe, a traditional enterprise, but most of the new arrivals are families escaping the horrors of war in Syria, Iraq, Afghanistan, and Yemen. Their plight has been described in the media in graphic terms, families arriving with nothing and expecting nothing, fleeing even worse conditions back at home.

The United States has taken in only a small number of the refugees and a usually voluble White House has been uncharacteristically quiet about the problem, possibly realizing that allowing in a lot of displaced foreigners at a time when there is an increasingly heated debate over immigration policy in general just might not be a good move, politically speaking. But it should perhaps be paying some attention to what caused the problem in the first place, a bit of introspection that is largely lacking both from the mainstream media and from politicians.

Indeed, I would assign to Washington most of the blame for what is happening right now. Since folks inside the beltway are particularly given to making judgements based on numerical data they might be interested in the toll exacted through America’s global war on terror. By one not unreasonable estimate, as many as four million Muslims have died or been killed as a result of the ongoing conflicts that Washington has either initiated or been party to since 2001.

There are, in addition, millions of displaced persons who have lost their homes and livelihoods, many of whom are among the human wave currently engulfing Europe. There are currently an estimated 2,590,000 refugees who have fled their homes from Afghanistan, 370,000 from Iraq, 3,880,000 million from Syria, and 1,100,000 from Somalia. The United Nations Refugee Agency is expecting at least 130,000 refugees from Yemen as fighting in that country accelerates. Between 600,000 and one million Libyans are living precariously in neighboring Tunisia.

The number of internally displaced within each country is roughly double the number of those who have actually fled and are seeking to resettle outside their homelands. Many of the latter have wound up in temporary camps run by the United Nations while others are paying criminals to transport them into Europe.

Significantly, the countries that have generated most of the refugees are all places where the United States has invaded, overthrown governments, supported insurgencies, or intervened in a civil war. The invasion of Iraq created a power vacuum that has empowered terrorism in the Arab heartland. Supporting rebels in Syria has piled Pelion on Ossa. Afghanistan continues to bleed 14 years after the United States arrived and decided to create a democracy. Libya, which was relatively stable when the U.S. and its allies intervened, is now in chaos, with its disorder spilling over into sub-Saharan Africa.

Everywhere people are fleeing the violence, which, among other benefits, has virtually obliterated the ancient Christian presence in the Middle East. Though I recognize that the refugee problem cannot be completely blamed on only one party, many of those millions would be alive and the refugees would for the most part be in their homes if it had not been for the catastrophic interventionist policies pursued by both Democratic and Republican administrations in the United States.

It is perhaps past time for Washington to begin to become accountable for what it does. The millions of people living rough or in tents, if they are lucky, need help and it is not satisfactory for the White House to continue with its silence, a posture that suggests that the refugees are somehow somebody else’s problem. They are, in fact, our problem. A modicum of honesty from President Barack Obama would be appreciated, perhaps an admission that things have not exactly worked out as planned by his administration and that of his predecessor. And money is needed. Washington throws billions of dollars to fight wars it doesn’t have to fight and to prop up feckless allies worldwide. For a change it might be refreshing to see tax money doing some good, working with the most affected states in the Middle East and Europe to resettle the homeless and making an honest effort to come to negotiated settlements to end the fighting in Syria and Yemen, both of which can only have unspeakably bad outcomes if they continue on their current trajectories.

Ironically, American hawks are exploiting the photo of the dead Syrian boy to blame the Europeans for the humanitarian crisis while also demanding an all-out effort to depose Bashar al-Assad. Last Friday’s Washington Post had a lead editorial headlined “Europe’s Abdication,” and also featured a Michael Gerson op-ed urging immediate regime change in Syria, blaming the crisis solely on Damascus. The editorial railed against European “racists” regarding the refugee plight. And it is not clear how Gerson, an evangelical neoconservative former speech writer for George W. Bush, can possibly believe that permitting Syria to fall to ISIS would benefit anyone.

We Americans are in something approaching complete denial about how truly horrible our nation’s recent impact on the rest of the world has been. We are universally hated, even by those who have their hands out to receive their Danegeld, and the world is undoubtedly shaking its head as it listens to the bile coming out of the mouths of our presidential candidates. Shakespeare observed that the “evil that men do lives after them,” but he had no experience of the United States. We choose to dissimulate regarding the bad choices we make followed up with lies to justify and mitigate our crimes. And still later the evil we do disappears down the memory hole. Literally.

In writing this piece I looked up Ali Hussein, the little Iraqi boy who was killed by the American bomb. He has been “disappeared” from Google, as well has the photo, presumably because his death did not meet community standards. He has likewise been eliminated from the Washington Post archive. The experience of Winston Smith in George Orwell’s 1984 immediately came to mind. 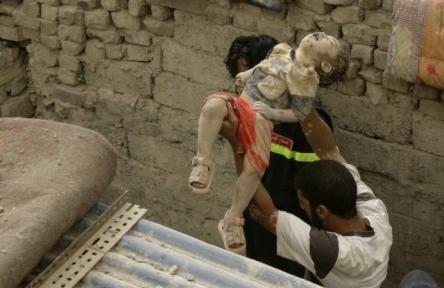