Why Rosenstein Must Be Fired & Held Accountable; He is of the ZIONIST Shadow Gov’t 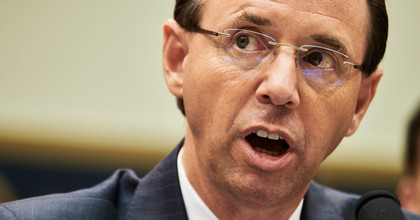 WASHINGTON — The deputy attorney general, Rod J. Rosenstein, suggested last year that he secretly record President Trump in the White House to expose the chaos consuming the administration, and he discussed recruiting cabinet members to invoke the 25th Amendment to remove Mr. Trump from office for being unfit.

Mr. Rosenstein made these suggestions in the spring of 2017 when Mr. Trump’s firing of James B. Comey as F.B.I. director plunged the White House into turmoil. Over the ensuing days, the president divulged classified intelligence to Russians in the Oval Office, and revelations emerged that Mr. Trump had asked Mr. Comey to pledge loyalty and end an investigation into a senior aide.

Deputy Attorney General Rod Rosenstein’s actions, as recounted by the New York Times Friday, are the equivalent of an attempted coup — a plot to overthrow the president. As the Times reveals, Rosenstein was furious that Democrats blamed him for the firing of FBI Director James Comey. Rosenstein, who had volunteered to write the firing memorandum, was “regretful and emotional.”  His behavior was described as “erratic.”

So, in an apparent act of vengeance, he proposed secretly recording the president to try to gain damaging information about him. CONTINUE READING

Klayman Commentary
With Hannity’s Advice, President Does Not Need Enemies!
(Admin:  Hannity is an Israel Shill)
For Fox News Host Ego and Ratings More Important than Principle or Justice!

(Washington, D.C.). Today, Larry Klayman the founder of both Judicial Watch and Freedom Watch issued this statement in the wake of yesterday’s revelations that Deputy Attorney General Rod Rosenstein had proposed wiring himself and others to secretly audio record President Donald Trump and then use the audio tapes to convince Vice President Pence and the cabinet to remove Trump under the 25th Amendment, as psychologically unfit.

Klayman had this to say:

Go to www.freedomwatchusa.org to join our