Secretary of State Mike Pompeo’s visit to North Korea this week came with high hopes. The previous two Pompeo visits, and other high profile meetings were all runaway successes, and the expectation was this would just further cement agreements already made. 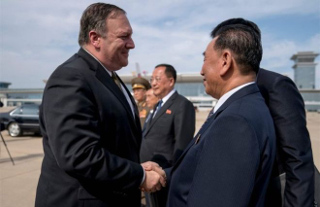 Instead, North Korea came out of the talks saying the whole two-day visit was “regrettable,” and that they find America’s attitude toward the diplomatic process “extremely troubling.” They said the US was not following the spirit of the Kim-Trump summit, and was just making demands throughout Pompeo’s visit.

Interestingly, Pompeo’s own statement appeared to try to spin the two-day visit as a success, saying a “great deal of progress” was made, and that more needs to be done, but not offering anything to suggest the talks ended badly.

The real evidence of how badly the visit went is that unlike his two previous visits, Pompeo didn’t even get to meet Kim Jong-un this time, instead only having talks with aide Kim Yong-chol. There were suggestions Friday night that the Kim visit was pushed to Saturday, but ultimately it never happened.

A North Korean Foreign Ministry statement called on both sides to take simultaneous actions to improve the environment surrounding the talks. How the US will respond publicly remains to be seen, as so far the administration doesn’t appear willing to even acknowledge that the talks went badly this time around.