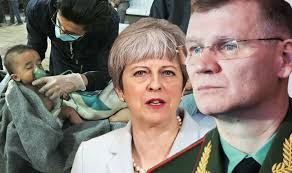 Boobus Americanus 1: I read in the New York Times today that Russia claims to have evidence implicating the British for staging a phony chemical attack in Syria.

Boobus Americanus 2: You know, I normally don’t give much weight to these false-flag conspiracy theories, but for the government of Russia to make such a claim at the UN … I think it merits consideration.