Whatever Jerome Powell said, Wall Street heard ‘rate hike’ –Crudele/New York Post
“Jerry Powell apparently doesn’t get it. The new head of the Federal Reserve isn’t supposed to imply that he doesn’t work for Wall Street. And he’s not supposed to say, as he did the other day in front of Congress, that ‘we don’t manage the stock market – we manage stable prices and maximum employment.’ That’s not what Wall Street and the stock market want to hear. And that was proven by the fact that the stock market dropped sharply on Tuesday when Powell was speaking. Investors are undoubtedly worried that Powell will be more like Paul Volcker, who left as head of the Fed in 1987 after conquering out-of-control inflation. Wall Street would like him to be more like more-recent ex-Fed bosses Alan Greenspan, Ben Bernanke and Janet Yellen – who wanted to be tight with politicians and loved by the investment community….But don’t worry. Powell will probably come around. The pressure to be loved by the rich and powerful is just too hard to ignore….Uh-oh, inflation ‘is moving up to target’ means that the Fed will be more vigilant and will be raising rates quicker.”

Debt Matters… –Zero Hedge
“My take: Consumer debt is a massive problem…I don’t think it’s an accident that markets have been reacting negatively to yields spiking. And it’s also not an accident that home sales are dropping in the face of higher rates. How sensitive to higher rates is the entire construct? Currently every spike in the 10 year invites selling during the day. Jerome Powell’s words led to yesterday’s 10 year spike above 2.9% and it flushed stocks. Yesterday we also learned that 72% of earnings growth since 2012 was due to buybacks, or financial engineering in short…That’s a big number and it reveals the extent of the mirage that has been propagated for the past few years. Consumers and the government are drowning in debt and the construct continues to be held up by low rates, hence the sensitivity. And I think principally people understand this. After all it’s not often that a macro chart goes viral….Rates have been rising and we see stress emerging any way you cut or slice the data. So I submit the Fed and markets find themselves in a narrative trap inside the bubble they have created. Hence the Fed’s tinkering with ‘gradual, patient, rate hikes’. Oh just shut up, you know exactly why you are trying to send that calm message because we saw yesterday what happens when the message gets interpreted differently: Stocks drop. Here’s the reality: Earnings growth is heavily reliant on buybacks which have been financed with debt and now with tax cuts, courtesy unwitting tax payers, but the structural growth component remains MIA….Now add 6-8 rate hikes over the next 24 months and what do you get?….And if unemployment picks up at some point you’ll have millions of consumers in high debt with limited savings and rising debt obligations. And then suddenly debt matters.”

The Fed Is About to Pop the Bubble in Stocks –Bonner/Bonner And Partners
“Yes, Dear Reader, the Fed giveth. And the Fed taketh away…Mr. Powell says the Fed plans to take back some $2 trillion over the next three years. What are investors thinking? That the Fed doesn’t mean it? That it won’t follow through? Or that higher rates won’t affect their stock portfolios? We don’t think the Fed will follow through, either. But it won’t get back on the job – inflating the markets and the economy – until the wolves have dragged away a few of the flock and the rest are running for cover. That’s the way it works. The Fed is not just fallible; it is also foolish. First, it makes mistakes. Second, it tries to correct its mistakes with more mistakes. And third, when it sees what a mess it has created, it reverts to the first mistake: It cuts rates… and holds them down too low for too long. Then it raises them… and the economy goes into recession. It cuts again. Raises again. And then, it must cut again. Or try to. The 10-year Treasury note yielded nearly 10% on Black Monday in 1987. It yielded over 6% when the dot-com bubble blew up in 2000. And it yielded just under 5% when the subprime mortgage crisis hit in 2007. But today, the 10-year note yields 2.9%, which doesn’t leave the Fed much to work with. So Chief Powell is making the second mistake now. He is eager to get yields higher before the next crisis hits. Then, he’ll have something to make the first mistake with. But raising borrowing costs is bound to set off the next recession/crash…Disaster could strike any day… as soon as investors realize that Mr. Powell is sneaking up on the bubble with a pin in his hands.”

Cryptocurrency Firms Targeted in SEC Probe –Wall Street Journal
“The Securities and Exchange Commission has issued dozens of subpoenas and information requests to technology companies and advisers involved in the red-hot market for cryptocurrencies, according to people familiar with the matter. The sweeping probe significantly ratchets up the regulatory pressure on the multibillion-dollar U.S. market for raising funds in cryptocurrencies. It follows a series of warning shots from the top U.S. securities regulator suggesting that many token sales, or initial coin offerings, may be violating securities laws….’Many promoters of ICOs and cryptocurrencies are not complying with our securities laws,’ SEC chairman Jay Clayton said earlier this year. In another speech he said he has instructed his staff to be ‘on high alert for approaches to ICOs that may be contrary to the spirit’ of those laws….’We’re seeing the tip of the iceberg … there is going to be a ton of enforcement activity,’ said Dan Gallagher, an SEC commissioner from 2011 to 2015 who now sits on the board of blockchain company Symbiont. Mr. Gallagher told an SEC conference in Washington last week that the largely unregulated token offerings are ‘the freaking Wild West – it is ‘Wolf of Wall Street’ on steroids.'” 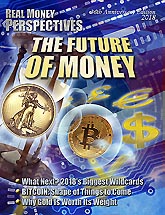 WHAT NOW?
By Craig R. Smith, Chairman, Swiss America – We seem to live in a very upside down world to say the least and it’s quickly spinning out of control. World politics and economics are so removed from any sense of normalcy that the average person is holding their breath and wincing at the future. Geopolitically and economically we are one headline away from a serious moment in history. More…