DID the DEEP STATE MURDER DC Madam Deborah Jeane Palfrey? D.C. Madam Afraid For His Life: Henry Vinson. They Drove the Happy Hooker Out of the United States.

Evidence is stacking up to suggest that the alleged “suicide” of DC Madam Deborah Jeane Palfrey was in fact a calculated murder, as the manager of Palfrey’s Florida Condo reveals that Palfrey was not suicidal when he spoke to her Monday and told him of her fears about a contract being out on her life.

The new testimony is backed up by at least four other recorded public statements on behalf of Palfrey attesting to the fact that she would never commit suicide and if she was found dead to immediately suspect murder.

Despite these on-the-record statements, the majority of the corporate media has ignored each one and instead given credence to the unverified claim of a professional conspiracy debunker who has been caught fabricating statements in the past.

The building manager of Park Lake Towers in Orlando, where Palfrey owned a condo, told WESH 2 news channel that he spoke to Palfrey on Monday as she was packing to leave for her mother’s house and she did not seem upset or suicidal.

“Jean Palfrey was a class act. She wore very good clothes. She was well educated. Her way out of this world certainly would not have been in an aluminum shed attached to a mobile home in Tarpon Springs, Florida,” said the manager, who did not want to be named.

The manager said that Palfrey had told him of her fears that a contract hit was out on her life.

“She insinuated that there is a contract out for her and I fully believe they succeeded,” he stated.

According to the manger, Palfrey left for her mother’s house with some suitcases and a box.

“She had one white paper file box that she told me had some important paper with her and then she just kind of raised her eyebrows like you’re supposed to think oh yeah, that’s all the information that she had on her business in Washington,” her building manager said.

If Palfrey was planning to commit suicide just three days later then why did she leave with several suitcases and a box of files?

According to an AP report, “Blanche Palfrey (her mother) had no sign that her daughter was suicidal, and there was no immediate indication that alcohol or drugs were involved, police Capt. Jeffrey Young said,” .

On at least four previous occasions, both in the past and more recently, Palfrey publicly stated that she would never commit suicide.

Twice on The Alex Jones Show, the most recent example being less than two months ago, Palfrey made clear her intention never to kill herself (Click here for MP3).

“No I’m not planning to commit suicide,” Palfrey told The Alex Jones Show on her last appearance in March, “I’m planning on going into court and defending myself vigorously and exposing the government,” she said.

“Not to be concerned, I have no intention of letting anyone buy me off or make any kind of a deal with me….and I’m not planning to commit suicide either,” said Palfrey on a separate occasion.

Alex Jones also talked directly to Palfrey during show breaks and she re-stated her intention never to commit suicide and made it clear that if she was found dead to consider it murder. GCN Live radio board operators are also witnesses to these statements.

Though never confirmed directly, Palfrey strongly insinuated that both Dick Cheney and John McCain were possibly involved in the DC Madam scandal, and this could have been one of the primary reasons why she was murdered.

During a May 2007 interview with Carol Joynt, host of the Q&A Cafe interview series, during a discussion about the alleged suicide of Palfrey’s former call girl Brandy Britton, Palfrey stated, “I don’t want to be like her. I don’t want to end up like her.”

During another appearance on The Alex Jones Show, Palfrey said she thought it was possible that Britton’s “suicide” was actually murder because none of Britton’s loved ones considered her to be suicidal.

Palfrey is on record as warning that any “suicide” would just be a cover-story for murder as far back as 1991.

“If taken into custody, my physical safety and most probably my very life would be jeopardized,” she wrote in August 1991 following an attempt to bring her to trial, “Rape, beating, maiming, disfigurement and more than likely murder disguised in the form of just another jailhouse accident or suicide would await me,” said Palfrey in a handwritten letter to the judge accusing the San Diego police vice squad of having a vendetta against her.

Despite these four separate examples of Palfrey stating – on the record – that she would not commit suicide – the corporate media, within hours of the announcement of her death, immediately afforded credence to the claim of a “friend,” investigative journalist Dan Moldea, who said Palfrey had told him of her intention to commit suicide.

Moldea has no tape, he has no other eyewitnesses, and he has been caught fabricating statements in the past, and yet the media took his words as gospel. In addition, if Moldea was aware of Palfrey’s intention to kill herself then why, if he was her “friend” as he claims, didn’t he try to stop her from doing so?

The numerous examples of Palfrey stating that she would never commit suicide in addition to her condo manager and her own mother stating that she was not suicidal clearly provide justification for an exhaustive police and FBI investigation to be undertaken. Despite these glaring factors, the police who discovered Palfrey’s body immediately ruled that no foul play was involved and closed the book. (Admin:  FBI is THE Cover-Up agency and if you don’t believe it read “The Franklin Cover-Up” by John DeCamp.  In his book the FBI covered up a child sex ring connected to Washington, D.C. with child MKUltra victims being flown there in private planes.)

The knowledge that Palfrey had about members of Washington’s elite being involved in and using her escort service for the purposes of hiring prostitutes would have been enough to end scores of careers and wreck the lives of countless influential power brokers. This alone, allied with Palfrey’s on the record statements, demand an immediate and thorough investigation in an attempt to bring to justice the murderers of Deborah Jeane Palfrey.

(Admin:  FBI is THE Cover-Up agency and if you don’t believe it read “The Franklin Cover-Up” by John DeCamp.  In his book the FBI covered up a child sex ring connected to Washington, D.C. with child MKUltra victims being flown there in private planes.  Think:  These D.C. Madams are directly infringing on the Deep States’ Prostitution/ Spying Business and they know too many secrets about key personnel.)

RELATED: DC Madam Predicted She Would Be Suicided

Another D.C. Madam Afraid For His Life:  Henry W. Vinson 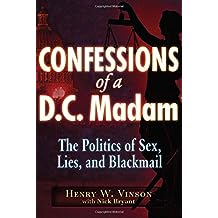 Confessions of a D.C. Madam: The Politics of Sex, Lies, and Blackmail

The Happy Hooker: My Own Story is a … In 1971 she was forced to leave the United States. … After a while, she buys out her former madam’s business as well.