Clinton Email Leak: ‘Foreign Govt Donors: All the Money Is In’

Clinton Email Leak: ‘Foreign Govt Donors: All the Money Is In’ 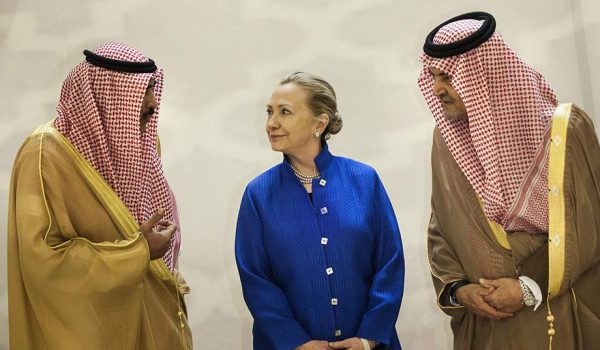 On Thursday, it was perhaps one of the shortest emails causing the biggest controversy.

In an email titled “endowment,” presumably sent from Tina Flournoy, the Chief of Staff for former President Bill Clinton, the body of the text reads simply:

“Foreign govt donors: all the money is in.”

While it is illegal for a presidential campaign to receive donations from foreign governments, the Clinton Foundation has continued to collect them — raising massive ethical questions regarding her presidential bid.

The email was sent on February 26, 2015 — just two days before an article in the Wall Street Journal headlined: “Foreign Government Gifts to Clinton Foundation on the rise.”

The foundation had previously stated that should Clinton run for the presidency, they would “consider whether to continue accepting contributions from foreign governments” to avoid the “appearance” of conflicts of interest.

During Clinton’s tenure as Secretary of State, the Obama Administration had worried about the foundation accepting money from foreign donors, and she had conditionally agreed to cease fundraising abroad.

As Breitbart News reports however, extensive research in Clinton Cash, and later confirmed by other outlets, found that she had violated this agreement multiple times.

The WSJ reported that the “United Arab Emirates, a first-time donor, gave between $1 million and $5 million in 2014, and the German government—which also hadn’t previously given—contributed between $100,000 and $250,000.”

“A previous donor, the Kingdom of Saudi Arabia, has given between $10 million and $25 million since the foundation was created in 1999. Part of that came in 2014, although the database doesn’t specify how much.”

It remains unclear how Clinton can continue to claim to be a champion of women while taking money from Saudi Arabia, a nation where women cannot do basic tasks without permission from a male relative.