Ashraf Fayadh © Ashraf Fayadh / YouTube
2.1K
A Palestinian poet has been sentenced to death by a Saudi Arabian court for allegedly abandoning his Muslim faith, Human Rights Watch reports. The death sentence comes after an initial 2014 verdict that sentenced the poet to four years in prison and 800 lashes.

Poet Ashraf Fayadh was detained in Abha, southwest Saudi Arabia, in 2013 due to allegations by a prosecution witness, who claimed he heard Fayadh cursing God, the Prophet Mohammed and Saudi Arabia. Also, the prosecution alleged offenses based on a book of poems Fayadh had written several years prior to that.

The poet’s friends, however, believe he was being punished for posting a video showing Saudi Arabia’s religious police (mutaween) lashing a man in public.

“They accused me [of] atheism and spreading some destructive thoughts into society,” Fayadh told The Guardian. The book, “Instructions Within,” published in 2008, was “just about me being [a] Palestinian refugee … about cultural and philosophical issues. But the religious extremists explained it as destructive ideas against God.”

Human Rights Watch’s Middle East researcher Adam Coogle, who says he has seen the trial documents, confirmed Friday that the death sentence handed down to Fayadh, a Palestinian national, was on charges of “apostasy.”

“I have read the trial documents from the lower court verdict in 2014 and another one from 17 November. It is very clear he has been sentenced to death for apostasy,” Reuters cited Coogle as saying.

According to the court documents, Fayadh denied the blasphemy accusations, saying he is a faithful Muslim. 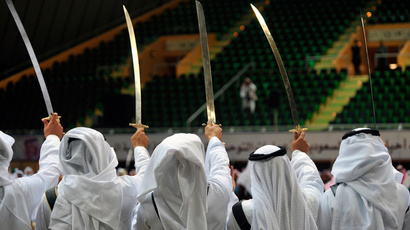 “I am repentant to God most high and am innocent of what appeared in my book mentioned in this case,” he said.

The main reason why the initial ruling of four years in prison and 800 lashes has been replaced with the death sentence is that Saudi judges are empowered to impose sentences according to their own interpretation of Sharia law. In Fayadh’s case, a second judge ruled that the defense witness testimony was ineligible and considered only the testimony of the prosecution witness.

“I was really shocked but it was expected, though I didn’t do anything that deserves death,” Fayadh told The Guardian.

There is still a chance that Fayadh could avoid being executed. He has 30 days to appeal the ruling, and failing that, if his case passes through all the stages of the judicial system, specifically the lower courts, the appeals courts and the Supreme Court, he could in theory still be pardoned by the Saudi Arabian ruler, King Salman.

Earlier, liberal writer Raif Badawi, who was sentenced to 10 years in prison and 1,000 lashes for blasphemy last year, received his first 50 lashes in January, sparking international outcry. Although Badawi continues to serve his term in prison, foreign diplomats in Saudi Arabia believe he is not likely to face more floggings.

As for Fayadh’s fate, so far Saudi Arabia’s officials and Justice Ministry have not made any official comment on the issue.