A tangled web of non-profit political organizations reveals that George Soros is behind yet another Jewish anti-Zionist front.
By: Vic Rosenthal
Published: March 11th, 2013 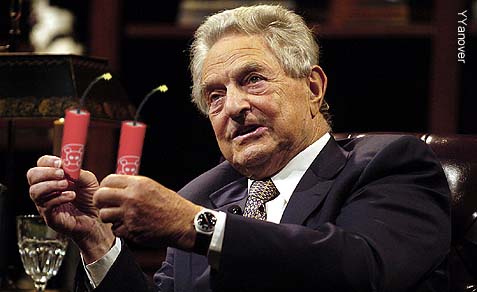 I’ve written ad nauseum that the most energetic and effective anti-Zionists are Jews, not Arabs or Muslims. A perfect example is the group called “A Jewish Voice for Peace” (JVP), based in the San Francisco Bay Area, but with chapters all over the country, mostly on college campuses.

JVP has been growing by leaps and bounds, with their 2011 form 990 (a tax form which all non-profits are required to make publicly available) showing an income from contributions and grants of $871,250. This is very big money for an organization whose membership appears to be mostly students and young people, and there is reason to believe that they have recently started to receive much more. Unfortunately non-profits that don’t give money to political candidates are not required to disclose the identity of their donors.

This week, during the annual AIPAC meeting in Washington DC, JVP has purchased 100 advertising signs in DC Metro stations, working with the very professional “Avaaz” group (more about them later), to “challenge [AIPAC’s] influence on U.S. foreign policy in the Middle East.” Here’s an example: 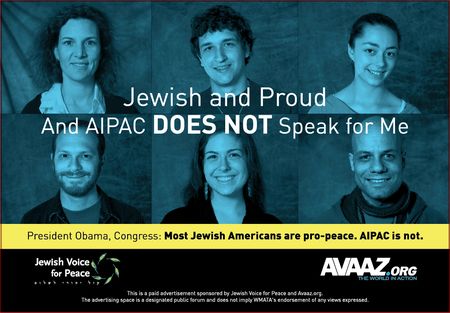 JVP likes media attention, and one of its favorite tactics is to disrupt pro-Israel speakers and events. Both the advertising and the disruption appear to be intended at least as much to attract attention — and recruits — to their organization as they are to change public opinion about their issues (promoting boycott-divestment-sanctions, portraying Israel as an apartheid state and human-rights violator, etc.).

Here is something else that I noticed on JVP’s form 990, which supports the idea that it is focused on growth. It has only one paid officer, Executive Director Rebecca Vilkomerson, who is listed as receiving total compensation of less than $75,000. But they also list $355,090 in “other salaries and wages.” Who are the additional employees? What do they do? It’s not the janitorial staff of JVP’s small Oakland office.

My guess is that they are organizers stationed on college campuses and other places where young Jews can be found. Although the organization wants to give the impression that it is an all-volunteer, ‘grassroots’ group, it seems that it is actually a disciplined professional operation that is rapidly growing. Their grants and contributions have increased by an average of more than $100,000 a year (with the exception of 2008, a bad year for all nonprofits).

Someone is pumping JVP up, and I think we can get a clue about who from the partnership with Avaaz. Avaaz is not (yet) big in the U.S., so you may not have heard of it. But let me quote from NGO Monitor’s analysis:

Avaaz was co-founded in 2007 by “Res Publica, a global civic advocacy group, and Moveon.org.” The former received grants totaling $290,000 from the Soros Open Society Institute in 2008. The latter received a $1.46 million grant from George Soros in 2004. Res Publica describes Avaaz.org as its “primary current project.”

According to a 2007 ABC News report on Avaaz.org’s call for the firing of Paul Wolfowitz as president of the World Bank, Avaaz.org is a “global advocacy group funded by philanthropist and financier George Soros, MoveOn.org and the labor group SEIU.”

A check into OSF 990s for 2010 or 2011 show no grants for Avaaz nor Res Publica. According to its 2011 990, Avaaz.org’s total revenue for that year was $7,519,028. Avaaz.org claims it is “wholly member-funded.” Avaaz does not publish a detailed list of donors on its website or 990 forms, and therefore this claim cannot be verified independently.

Avaaz.org is active in the Israeli-Palestinian arena. Its 2011 campaign “Palestine: the time is now,” was aimed at pressuring the UK, France, and Germany to support a Palestinian bid for recognition. The petition and accompanying video titled “Middle East Peace – The Real Story” promotes the Palestinian narrative. In 2007 Avaaz.org launched a petition calling to “End the Siege of Gaza: Ceasefire Now” demanding an end to the “blockade and growing humanitarian crisis in Gaza” and “ensure the free flow of supplies by land, sea or air.”

Avaaz, with its huge budget, is as slick as it gets (here is a discussion of how it managed a fake grassroots Internet campaign for Palestinian recognition). My guess is that Soros is getting behind JVP as well, and with the same objective: to create a ‘popular’ Jewish anti-Zionist movement.

Soros, in other words, is pitching a whole line of anti-Israel merchandise to Jews. Are you a progressive who wants to distance himself from Israel along with your left-wing friends, while still remaining a member of your (liberal) synagogue? Buy some J Street! But suppose you want to see Israel replaced by an Arab state and don’t care who knows it — if you are suffering from stage-4 Oslo Syndrome — then JVP is for you.

There is a reason why so much of the heavy artillery of anti-Zionism is turned on the American Jewish community. True or false, it is seen as the key to American support for Israel.

About the Author: Vic Rosenthal created FresnoZionism.org to provide a forum for publishing and discussing issues about Israel and the Mideast conflict, especially where there is a local connection. Rosenthal believes that America’s interests are best served by supporting the democratic state of Israel, the front line in the struggle between Western civilization and radical Islam. The viewpoint is not intended to be liberal or conservative — just pro-Israel.

The author’s opinion does not necessarily reflect the opinion of The Jewish Press.