The heavy-metal group Guns N’ Roses was inducted into the Rock and Roll Hall of Fame beside the Beatles and Elvis at Saturday’s 27th annual ceremony in Cleveland.

Michael Monroe is one of rock and roll’s most respected yet least well-known stars. While he’s been a big influence on “hair metal” bands like Motley Crue, Guns N’ Roses, and Poison, the nearly 50-year old musician has yet to make it big in the U.S.

Four thousand miles away, in Turku, Finland, Matti Fagerholm, the rock singer whom Guns N’ Roses acknowledges as an inspiration, has just received a more modest accolade: “Vuoden Turkulainen,” or Turku’s Person of the Year award.

Mr. Fagerholm, who goes by the name “Michael Monroe,” is perhaps the world’s most respected, yet least famous, rock star. Considered by some the godfather of “hair” metal, a much-maligned genre popular in the 1980s that showcased teased coiffures, suggestive lyrics and bombastic guitar solos, he remains a mystery to all but the most hard-core listeners.

“He’s a 50-year-old who’s doing splits on stage,” says Alexander Stubb, Finland’s minister of foreign trade, who listens to Mr. Monroe’s music on the treadmill. “Michael’s always been different. He loves the success of others and doesn’t see someone else’s gain as his loss.”

While Guns N’ Roses singer Axl Rose and former guitarist Slash haven’t spoken since the band’s acrimonious breakup in the mid-1990s—and didn’t speak Saturday, since Mr. Rose declined to attend the ceremony—one thing they agree on is Mr. Monroe. “Michael Monroe is one of THE great rock and roll front-men,” Slash said by email. “He’s also a good man and a good friend.”

Mr. Monroe’s relative obscurity reflects a Finnish dilemma. A rich country of 5 million, Finland sells electronics and metal products world-wide. But its exports of heavy metal, the musical kind, haven’t been as popular.

Which is frustrating to Finland’s government promoters, given their nation’s obsession with the genre. Finland has more metal bands per capita than any country, with 53.5 per 100,000 people, followed by Sweden and Norway, according to an analysis based on data from website Encyclopedia Metallum. The U.S.? Only 5.5.

While in America government support for metal is unthinkable, Finland’s ministries of economy and culture last year spent around a half-million euros (about $650,000) promoting metal bands abroad. 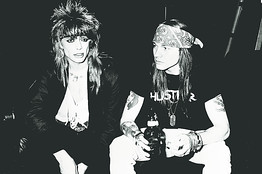 In December, Mr. Monroe, who received the equivalent of $30,000, was invited to attend then-President Tarja Halonen’s annual gala at her castle. He wore a violet satin shirt that stood out in the sea of standard tuxedos, and traded exercise tips with Finnish ministers. “It’s great to have this kind of respect from the system,” he says. “Usually I’d be rebelling against it.”

Finland has been promoting its musicians for years, and while officials feel efforts are working, they would still like to see the nation’s artists gain a wider audience. Most people “probably couldn’t name a Finnish band,” says Tuomo Tähtinen, 29-year-old executive director of Music Finland, the government-funded organization that finances Finland’s music exports.

Sweden has succeeded with ABBA and Roxette, as well as metal acts Europe and Opeth, but Finland is “quite far behind,” says Mr. Stubb, the Finnish trade minister.

Even inside Finland, the homegrown talent sometimes struggles for recognition. Many Finns, for instance, can readily recognize the opening riff of the Guns N’ Roses song “Welcome to the Jungle.” Less well known is the fact that the song’s title appears in a lyric sung three years earlier by Mr. Monroe in another song.

Ben Varon, of Amoral, a Finnish band that played at last month’s South by Southwest music festival in Austin, Texas, says he was first inspired to ask his mother for a guitar after watching a Guns N’ Roses video. It was only later, he adds, when Guns N’ Roses mentioned Mr. Monroe as one of their inspirations that he learned of him in his home country.

Needless to say, it isn’t easier to promote Mr. Monroe on the global stage. Alicia Shelton, a 46-year-old mother of two in Richmond, Va., says she feels “all alone” in her appreciation of Mr. Monroe.

“The very first time I saw the ‘Welcome to the Jungle’ video [by Guns N’ Roses] on MTV, my instant reaction was, these guys are trying to be Hanoi Rocks,” she says. Hanoi Rocks is the name of Mr. Monroe’s original band, which disbanded in 1985 after the death of their drummer in a car accident. “It’s like Michael has nice-guys-finish-last syndrome.”

Guns N’ Roses has itself tried hard to promote Mr. Monroe. In the 1980s, the U.S. band persuaded their record company to rerelease Hanoi Rocks’ out-of-print albums. “They wanted to make people aware of us,” Mr. Monroe says.

Since then, Guns N’ Roses members have repeatedly cited Michael Monroe and Hanoi Rocks as a primary influence. “If Hanoi Rocks had reached the success they should have,” Mr. Rose has said, “no one would ever have heard of Guns N’ Roses.” Mr. Rose didn’t respond to requests for comment for this article.

Since Hanoi Rocks dissolved, Mr. Monroe has taken several stabs at a solo career. But even with government backing, it has been a lean affair. With Music Finland paying only half of a band’s tour expenses (up to 20,000 euros), Mr. Monroe has had to take austerity measures.

Touring last year, Mr. Monroe lived in a $29,000 bus with his bandmates and wife, Johanna, and showered at music venues. His band ate fruit, nuts and sandwiches required by Mr. Monroe’s contract—avoiding costly restaurants. Trashing the hotel room was out of the question, because there wasn’t one. “In the old days, people would go party hardy,” Mr. Monroe says. “Now you’re trying to keep costs low.”

Mr. Monroe, who sings and plays the saxophone in his performances, says he tries “not to break too many mic stands,” in part to save money. Mr. Monroe estimates he destroys about 50 mic stands a year. But he says he’s also mindful that each one costs about 20 euros. Last year, he says, his tour ended with him $196 in the red.

Despite getting knocked down throughout his career, Mr. Monroe keeps getting back up. Performing at New York’s Bowery Ballroom in October, he slipped in a pool of his own sweat, hit his head, and tore a gash in his arm but kept on performing. His next show is in New Jersey next month.

Joel Peresman, president of the Rock and Roll Hall of Fame in Cleveland, says he vaguely remembers trying to sign Hanoi Rocks for a show as an agent in the ’80s. “I always liked that band,” he says.

Write to Neil Shah at neil.shah@dowjones.com