North Korea Responds to Trump’s Comments: Only Trump is on a Suicide Mission-Not North Korea 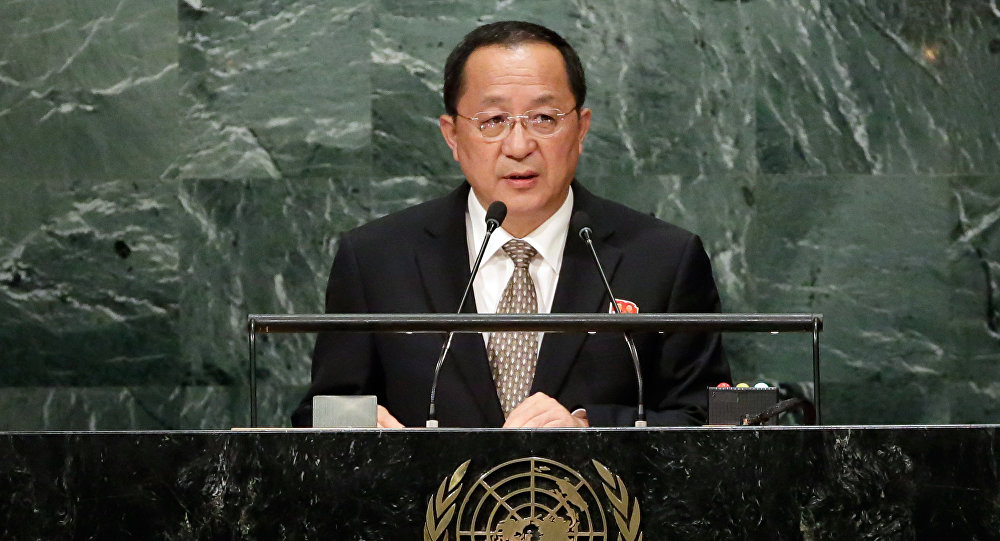 North Korea: Nobody Except Trump Himself Is on a ‘Suicide Mission’

North Korean Foreign Minister Ri Yong Ho stated in his address to the UN General Assembly that nobody except US President Donald Trump himself is on a ‘suicide mission’.

He added that by calling North Korean leader Kim Jong-un a “Rocket Man”, Trump committed an irreversible mistake of making the country’s rockets visit to the entire US mainland ‘inevitable all the more’. Ri Yong Ho stated that Donald Trump will have to face the consequences over his offensive remarks about North Korea and its leader.

“We will make sure that he [Trump] bears consequences far beyond his words, far beyond the scope of what he can handle even if he is ready to do so,” the minister said.

The North Korean foreign minister also called Trump ‘a mentally deranged person full of megalomania’ who is holding ‘the nuclear button’. According to the minister, if innocent Americans are harmed by the suicide attacks, ‘Trump will be held totally responsible’.

“In case innocent lives of the US are lost because of this suicide attack, Trump will beheld totally responsible,” Ri added.

The foreign minister claimed that Pyongyang’s ultimate goal is to establish the balance of power with the United States. He noted that the country’s nuclear weapons are meant for self-protection.

Ri Yong Ho announced that North Korea will take preventive measures by ‘merciless preemptive action’ in case the US or its allies show any sign of conducting a kind of ‘decapitating’ operation in the country or in case of a military attack.

“We will take preventive measures by merciless preemptive action in case the US and its vassal forces show any sign of conducting a kind of ‘decapitating’ operation on our headquarters or military attack against our country,” the minister said.

“We do not have any intention at all to use or threaten to use nuclear weapons against the countries that do not join in the U.S. military actions against the DPRK [Democratic People’s Republic of Korea],” Ri said in his address to the UN General Assembly.

The minister said that North Korea was not going to change its policy despite aggravating sanctions against the country.

“Through such a prolonged and arduous struggle, now we are finally only a few steps away from the final gate of completion of the state nuclear force. It is only a forlorn hope to consider any chance that the DPRK [Democratic People’s Republic of Korea] would be shaken an inch or change its stance due to the harsher sanctions by the hostile forces,” Ri said.

President Donald Trump on Wednesday called Kim a “rocket man” on a “suicide mission,” in his first major speech at UN, and said Pyongyang faced a total destruction if it attacked the United States or its allies.

The North Korean leader in response to Donald Trump’s speech accused US President of exhibiting a “mentally deranged behavior” and threatened him with a “highest level of hard-line countermeasure in history”.