As the White House and the Pentagon are seemingly attempting to downplay US President Donald Trump’s warmongering rhetoric against North Korea, RIA Novosti political observer Dmitry Kosyrev reveals who Trump’s “fire and fury” message could have been really aimed at.

It appears that neither the White House nor the Pentagon was actually harboring plans to launch a strike on North Korea, RIA Novosti political observer Dmitry Kosyrev writes, wondering whether Donald Trump’s “locked and loaded” military solutions against Pyongyang were just empty threats or part of a “cunning plan.”

​However, Trump’s “fire and fury” rhetoric has not been followed by any actions, Kosyrev noted.

Quite the contrary, during his Monday meeting with South Korean President Moon Jae-in Gen. Joseph Dunford, the chairman of the Joint Chiefs of Staff, highlighted the priority of diplomatic and economic measures over military options in resolving the Korean crisis.

At almost the same time, Secretary of State Rex Tillerson and Secretary of Defense Jim Mattis wrote in their article for the Wall Street Journal that “the Trump administration… is applying diplomatic and economic pressure on North Korea to achieve the complete… denuclearization of the Korean Peninsula.”

“The US has no interest in regime change or accelerated reunification of Korea. We do not seek an excuse to garrison US troops north of the Demilitarized Zone. We have no desire to inflict harm on the long-suffering North Korean people, who are distinct from the hostile regime in Pyongyang,” the joint statement underscored.

© AFP 2017/ JUNG YEON-JE
War of Words: ‘There is Nothing Tangible’ Behind US-N Korean Exchange of Threats

So, the question arises: What was the Washington-Pyongyang “war of words” really about?According to Kosyrev, China is likely to have been the main target for Trump’s “fire and fury” message. The observer believes that Washington is trying to manipulate Beijing into exerting yet more pressure on Pyongyang.

At the same time, however, the White House vehemently rejected the “double freeze” solution offered by Moscow and Beijing which envisaged freezing North Korea’s nuclear and missile activities in exchange for the US and South Korea suspending their joint military drills.

Washington insists that one shouldn’t put the US and North Korea on an equal footing, Kosyrev wrote.

The political observer added that the US is reportedly mulling over unilateral “secondary sanctions” against banks and firms which cooperate with Pyongyang.

According to the South China Morning Post, the Chinese banks that hold money for companies that do business with North Korea could be the first to fall prey to the restrictions. 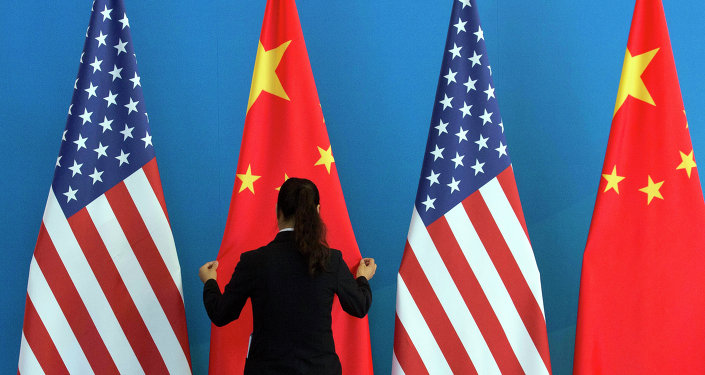 Citing Jessica Bartlett, a senior associate at Freshfields Bruckhaus Deringer based in Hong Kong, the media outlet suggests that Chinese banks “may have little choice but to comply.”American regulators have “the ultimate weapons”: they could forbid a bank from clearing US dollars and thus bring the bank’s activities to a halt, Bartlett explained.

Meanwhile, rumors have emerged that Washington and Pyongyang are being prepared for bilateral talks, Kosyrev noted.

“There are persistent rumors that direct negotiations between the Americans and the North Koreans are being prepared… and what is going on is just a Trump-style [attempt] to strengthen [the US] positions ahead of the talks,” the political observer wrote, suggesting that Pyongyang is doing exactly the same.

Michael Madden, a Korea expert and visiting scholar at the US-Korea Institute at the School of Advanced International Studies at Johns Hopkins University, shares a similar stance.

“North Korea is very careful in how it formulates its statements,” Madden told Radio Sputnik, “And if we go to the two statements that have come out from North Korea’s Strategic Forces, its missile forces, this is always couched in a very sort of hypothetical language…. The phrases keep coming up: ‘we are seriously considering.’ They have not done anything yet!”

The question arises whether Trump’s “art of the deal” in regard to China would work. According to Kosyrev, there are more chances that the Trump administration will only “succeed” in alienating Beijing further.