‘They Know That We Know They Are Liars, They Keep Lying’ (West’s War Propaganda on Ghouta Crescendos)

We are currently witnessing truly remarkable developments in Syria, as the country’s army and allies liberate more districts of Eastern Ghouta. Almost 80,000 people have been evacuated, with more still streaming out. [*Note: as of March, the number is over 87,000 people.] 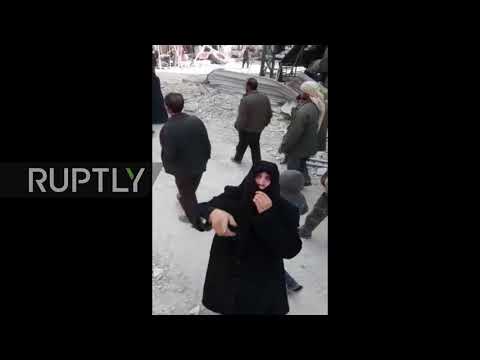 Instead, Western corporate media continues to shriek the war propaganda we already heard from eastern Aleppo in December 2016, from Madaya in 2016 and 2017, and elsewhere in Syria whenever the liberation of terrorist-held areas was underway. I’ve been to liberated Homs, Aleppo, Madaya, al-Waer. Syrian civilians spoke to me of their gratitude to their army for saving them. When the media cried that the areas had ‘fallen’ and blasted about Syrian-Army massacres, it was simply lying, and the areas returned to peace and stability.

As per their norm, corporate media’s reports on Eastern Ghouta rely on the usual suspect sources.

Reporting from Istanbul, The Guardian’s Kareem Shaheen, on March 16 – a day when over 13,000 civilians escaped terrorist rule in Ghouta – produced yet another article of inverted reality, shamelessly writing: “Residents in the enclave have said they want to be able to leave the besieged areas but with international guarantees that they will not be detained or otherwise punished by advancing regime troops.”

Video evidence contradicts this claim. Civilians complained that terrorists would not allow them to leave, that terrorists were preventing them from doing so by shooting at them and shelling humanitarian corridors. This is a tactic that was seen in late 2016, when terrorists in eastern Aleppo did precisely the same thing, shelling humanitarian corridors (including one I stood on  in November 2016).

Shaheen would do well to leave Istanbul and report honestly from within Syria – and I don’t mean sneaking illegally in and embedding with Al-Qaeda.

The New York Times’ March 15 article described terrorists occupying Ghouta as a “rebel movement,” and cited sources tightly affiliated with these terrorists. Lexicon is important. Corporate media’s “rebels” are Syrian civilians’ nightmares, terrorists. Yet, corporate media has consistently, and deliberately, chosen lexicon which whitewashes some of the most heinous terrorists of our day.

One of the NY Times’ sources, Mohammad Adel, wrote on Facebook that his superhero name would be Zahran Alloush. Recall that Alloush was the head of Jaysh Al-Islam, and the terrorist behind putting civilians (including women) in cages to use as human shields.

Quite a ‘hero’ to aspire to be. Quite an activist source to quote.

The authenticity of Amer Almohibany’s photos, used in the article, should be questioned, given that he is not a neutral Getty photographer. Like Mohammad Adel, Almohibany praises Jaysh Al-Islam, indeed has spent time with them as they fire missiles towards Damascus, also eulogized Zahran Alloush (whose photo he took at close proximity), and incidentally enjoyed food that most Ghouta residents were deprived of by terrorists.

The media frenzy has even rehashed the 2016 theme of Aleppo child Omran Daqneesh as the face of suffering in Syria, with war propagandist Assad Hannaa tweeting on March 9:

“This is another Omran, history is repeating itself Omran of Ghouta. Omran was lucky to survive this brutal airstrike by the Assad regime but unfortunately his three-month-old sister Katr Al Nada did not.”

It is unlikely that Hannaa read my reply that Omran Daqneesh himself was not gravely injured, nor by an airstrike, as his father told me in June 2017. And it is despicable that Hannaa, surely knowingly, re-exploited Daqneesh.

While Jaafari was referring to America’s lies and longtime war propaganda, this also clearly applies to corporate media.

“The problem is not the media’s lack of capacity to get through to the truth but rather its disinterest in the truth, in favor of government policies based on lies and deception.”

And in a recent interview, former British ambassador to Syria, Peter Ford said:

“Western mainstream media have their narrative and they don’t want to see it disturbed. Any evidence that goes against their preferred narrative – namely that ‘Assad is a butcher, massacring his people’ – anything that disturbs that narrative is simply ignored or mocked. But the truth is beginning to come out… All these crocodile tears being cried by the likes of Ambassador Nikki Haley in New York are disgraceful, trading on sentiment when behind it is just cynical great power maneuvering.”

Chemicals and lab in Eastern Ghouta

One of the accusations shrieked by Nikki Haley is that the Syrian government used chemical weapons. However, this accusation and the many prior, is fact-devoid rhetoric. Yet, on March 12, Russia’s envoy to the UN, Vassily Nebenzia, named Al-Nusra as being behind the March 5 chlorine attacks in Eastern Ghouta. To those closely following events in Syria, this is far from the first time terrorists in Syria have used chemical weapons, then blamed it on the Syrian government.

On March 16, journalist Sharmine Narwani wrote of the “well-equipped chemical laboratory run by Saudi-backed Islamist terrorists,” which she had seen the day prior in Shifoniyeh, Eastern Ghouta. Peppered with her photos of the equipment (including US-made equipment), Narwani’s article aptly argues that terrorists have both motive and capability to stage chemical attacks in Syria, and outlines previous instances in which they have.

In spite of this latest revelation, Haley and the UN itself will turn blind eyes to the terrorists’ possession of chemicals, and to their relentless attacks on Damascus, which have killed over 10,000 civilians. The mortar and missile attacks on Damascus and elsewhere in Syria merit no outrage from the UN.

On March 5, an article citing Trappist Nuns in Syria read:

“We, the people who actually live in Syria, we are really exhausted, nauseated by this global indignation that issues blanket condemnations of those who defend their lives and their land.

“The attacks on civilians in Damascus, began from the Ghouta area into the government-controlled part, and not vice versa… Why this blindness on the part of the West?”

It is a painful rhetorical question that many of us have asked over the years, well-aware of the answer: because it doesn’t serve the regime-change agenda, one so diligently put forth by the corporate media.

As the war propaganda continues, I quote the nuns, who said: “Deliver us Lord from the war… and deliver us from bad journalism.”

–What Life Is Like Under ‘Moderate’ ‘Rebel’ Rule (Aleppo)

–Where is the West’s compassion & condemnation following terror attacks in Middle East?

–The Terrorism We Support in Syria: A First-hand Account of the Use of Mortars against Civilians